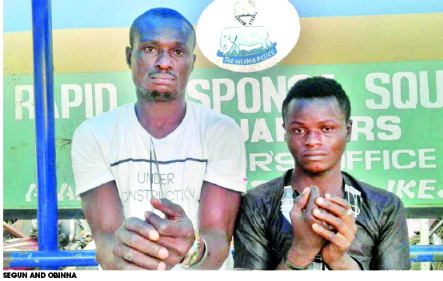 “I have lost my sleep for some days now and I can’t wait for my husband to relocate us from that compound. I panic when I recall that I was sleeping naked the day robbers entered our house, raided the entire house and left with our portable valuables,” said Mercy (surname withheld) who lives in a supposedly secure estate in Surulere, Lagos.

Mercy’s case is one out of several reported cases of theft where victims slept while suspected robbers robbed them of valuables. This set of robbers can best be described as ghosts as they simply raid homes without the knowledge of occupants. Their victims will confirm their visit through their torn or broken windows and most cases the door that leads to the house will be left wide open. It is widely believed that the criminals normally spray a sweet gas known as Chloroform to sedate their victims for hours before gaining entry into their homes. The effect will wear out hours later.

Narrating what she could recall after the horrifying incident, Mercy who is a business woman said: “ It was on Tuesday at 5a.m when I woke up to prepare food for my daughter who leaves for school as early as 6.30am. Unlike me who loves waking up as early as 3.30am to watch the repeat version of Telemondo, I discovered that I slept deep. I wasn’t bothered because I assumed that it was as a result of a stressful day. I decided to check on my husband and if possible get a good morning kiss, only to see him frantically searching his room and asking for his phone.

“I told him that I am not in the habit of picking his phones for whatever reasons. It was then that he realized that his laptop and 32inch flat screen television were also missing. His wallets, watches and designer shirts and trousers were all missing. I nearly fainted when I realized what could have happened as I ran to my daughter’s room and was relieved to find her still sleeping and unharmed. I ran to my own room and my phones, watches, perfumes, jewellery and handbags were all missing. It was then that I realized that the small window close to the roof was open. It had no burglary proof because we assumed that no one could even consider that part of the house as a transit point.

“I kept shivering and rushed to the bathroom to check myself out if I was raped while I was sleeping. I do not sleep with pants because of the hot weather. I thanked my stars that they were merciful. It was then that we discovered that the kitchen door was left wide open. I guess that was where they passed through with their loot. No one in the compound including the security man at the gate saw or heard them while the raid lasted. In fact, we were the ones who woke up the security man who was still fast asleep.”

From Surulere to Mafoluku, the story is the same. Another victim, an Indian simply identified as Gaja had his family house raided about a week ago. “My apartment is located in an area that is said to be one of the secure estates in Mafoluku near the international airport road. I relocated to Nigeria with my family and extended family members because I have a 10 year-contract in this country. Insecurity is a global thing, that is why I accepted this location based on recommendation because it’s close to the airport and my place of work. Above all, it is relatively affordable.

Last Thursday, I woke up around 5am still feeling very sleepy. I was surprised that the alarm clock rang through at 2am and I did not wake up. It has been a routine for years that I wake around 2am to pray. I went downstairs to get a glass of water only to discover that the sitting room entrance was wide open. I personally locked the door before going to bed. It was then that I realized that a lot of things were missing in the house. I cannot explain how everyone in the house including the security man slept off while they looted our house”, he stated.

When asked if the matter was reported to the police, he said yes. “We reported the matter to the police and they visited the scene of crime. The robbers tore the window net and opened the door through the window, they left with valuables. I am terrified because I do not have an explanation as to why the entire family slept while the whole house was ransacked.”

Confirming his story, other tenants in the area said they were also raided that very night. “I was lucky that they did not enter my house, we got to know that there was an attempt due to the blood stains that we saw in our compound. One of them must have sustained a major injury while trying to scale the fence. We had alerted the police who visited the scene; they were the ones that told us that the Indians and the hotel were all raided that night. I guess our compound was used as a transit point because the fence is not that high,” said one of the tenants.

I was lucky they did not pick my AK47

From civilians to security personnel, the story is the same. According to a senior police officer who is a Divisional Police Officer (DPO) in Lagos State, his saving grace was that they did not steal his service rifles which were on the floor.

“I am still embarrassed to tell the story because I know how many criminals I have arrested during my days in Apapa, Ajangbadi and Lekki. Weeks ago, I was lucky to have returned home early and had the opportunity to go to bed early. At 4am the next day, I suddenly woke up with the sole intention to urinate and probably drink a glass of water and return to bed.

“It was while I was getting the water that I realized that the entrance door was wide open. I rushed back and picked my pistol with the hope that the intruder was still in the house. I searched all over and saw no one, rather I discovered that the intruders ransacked the whole house including my room. They took all my phones including the one under my pillow while I was sleeping. They collected all the cash they could lay their hands on in all the rooms while my entire family slept.

“I simply fell on the ground and thanked God that they did not collect my pistol or rifle because I would have been dismissed from service because of that. Luckily, I was able to trace the receiver of those stolen phones but they could not identify the people who sold to them. I am sure they are barracks boys. It was then I investigated further and got to know about the gas called Chloroform which when sprayed in the air will cause anyone who inhales the air to be unconscious for about four hours”, the DPO said.

According to him, investigation revealed that the boys who pray that they will never be caught do not normally harm or rape their victims. “All they do is to study the house and the possibility of breaking into it without making much noise. They gained entrance through the back door. The door handle is close to the window, so all they did was to tear the window net and gently opened the door as the key was on doorknob.

“If your house is well secure with burglary proof both on the windows and doors, they will not have access into your house. The much they will do is to tear your window and look out for valuables within reach through the windows. They could use an iron rod to take your clothes or bags. Simply avoid keeping your valuables close to the window even if you are living upstairs. We have had cases where they come with ladders and raided several flats upstairs. It is much more common where you have unemployed touts hanging around even in secure estates. They can be seen in these estates as errand boys but they are notorious at night. Secure your doors and do not leave valuables or keys within reach”, the police chief counseled.

How we procure Chloroform for operations

Two of such suspected criminals were recently arrested by Lagos State police command. They were tracked through the phones stolen during their robbery operations. They told the police that the phones were stolen from people’s houses while they were asleep.

According to one of the suspects identified as Segun, most of his victims do not properly lock their doors. “We are not armed robbers but thieves. I do not know of any gas, all we do is to observe the sleeping pattern of our target and how easy it is to break into their houses. Lagos is very hard that is why most people sleep and you will think that they are dead. Some people use sleeping gas but I do not know the name of the gas or where they normally get them.

My friend once told me that it can be found in any place where they are selling or repairing fridge. In our area in Mushin, most of the people living in cheap houses do not close their houses properly. Some even leave their doors open because of hot weather. These are the kind of places that I normally enter.”

Another suspect, Obinna who seems to know much about it said that Chloroform can be bought at Alaba market or Ebute Meta market. “I know about that gas and my friend who is in Kirikiri prison, is the one who normally gets it at Ebute Meta market. We call it the sleeping gas. He told me that there is a man who normally smuggles the product for him. We only used it severally in Ebute -Meta especially where their security men find it difficult to sleep at night. It normally lasts for two hours, so we have to be very fast.

“We do not carry guns or even knife; the person will be sleeping so there is no need. Most of the times we pick things through the window,” he said.