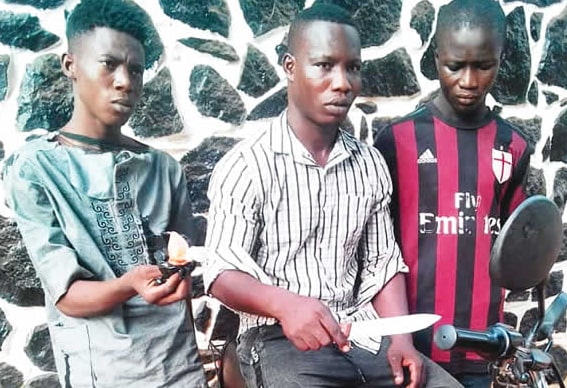 A 3-man robbery syndicate, which specializes in snatching of motorcycles from their owners by pretending to be passengers, has been busted by men of the Ogun State Police Command.

The suspects, Tajudeen Akeem , Idowu Samson and Taofeek Taiwo, were arrested after allegedly blowing dry pepper into the eyes of their latest victim, AbdulGaniy Olakintan, and snatched his motorcycle.

The Police Public Relations Officer in the state, Abimbola Oyeyemi, said Olakintan lodged a complaint about the incident at the Ilaro Police Station.

Oyeyemi explained that the victim narrated his ordeal in the hands of the gang that he carried three passengers from a filling station in Ilaro to Odo-Fufu area, but was robbed by the passengers, who suddenly brought out a knife.

The victim added that the suspects forced him to stop and subsequently rubbed dry pepper in his face before taking his motorcycle away.

According to the PPRO, the gang members were arrested on Wednesday following a complaint lodged at the Ilaro Police Station.

Oyeyemi stated, “Following the report, the DPO, Ilaro Division, CSP Opebiyi Sunday, detailed his detectives to embark on a serious manhunt for the hoodlums.

“Their efforts paid off and following a tip-off and the assistance of members of the community, one of the suspects, Tajudeen Akeem, was arrested. His arrest led to the apprehension of the other two suspects, Idowu Samson and Taofeek Taiwo.

“On interrogation, the suspects, who all live in the Mushin area of Lagos State, confessed to being responsible for series of motorcycle snatching in Ilaro and its environs.”

He added, “Recovered from them are the snatched motorcycle, a nylon containing dry pepper, and a knife used for the operation.

“The Commissioner of Police, Ahmed Iliyasu, has ordered the immediate transfer of the suspects to the Federal Special Anti-robbery Squad for discreet investigation.

“He also warned cyclists to desist from carrying more than one person at a time for their own security and safety.”