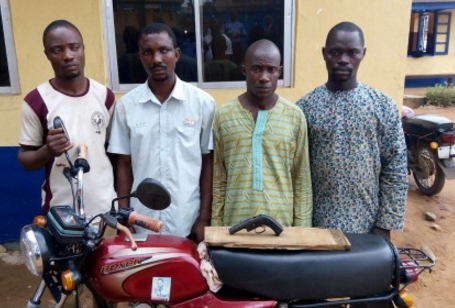 The dare devils who allegedly killed the breadwinner of a family in Benin city on Monday morning have been arrested.

According to eyewitnesses, 52-year-old man simply identified as Abdulahi suffocated to death after some gunmen stormed a phone shop where he worked on Airport Road in Benin city at midnight.

The father of 3 from Auchi was tied hands and feet with a piece of cloth tied around his nose and mouth. He reportedly suffocated to death while the robbers carry out their operation.

Abdullahi had attempted to stop the robbers when he was overpowered.

Another night guard simply identified as Austin reportedly fled the scene when the dare devils struck. His whereabouts remains unknown.

The gunmen were caught on Airport road today while trying to flee Benin city.

They were found in possession of luxury phones stolen from the shop.

The widow of the deceased, Mrs. Abdullahi, said her husband’s death means the beginning of hard life and suffering for her.

“It was when I was told that someone died that I knew that it was my husband. They have put me into suffering! Look at me? Where will I start from?”‎ she lamented