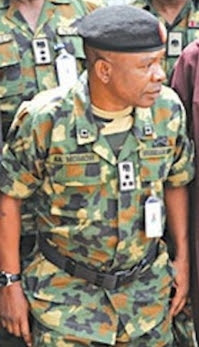 The Nigerian Army has forced Aliyu Momoh to retire after he was indicted by a military Board of Inquiry (BOI).

The board led by General Oyebade indicted Momoh last year for his alleged involvement in rigging June 2014 gubernatorial elections in Ekiti state.

Army Acting PR Director, Colonel Usman confirmed today that Momoh has been forced to retire from the army.