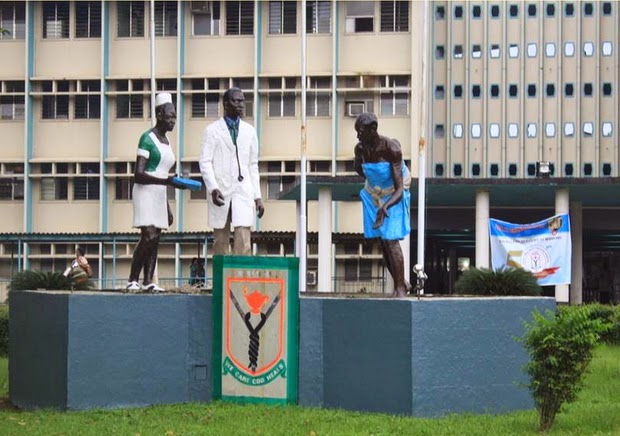 Around 7:30am last Thursday, some armed robbers dressed in Doctors uniform rushed into the ARD Lounge of Lagos State University Teaching Hospital Complex in Idi Araba.

The dare devils threatened to kill all the doctors on duty before dispossessing them of their valuables.

Hear what few of the victims told reporters who visited the hospital yesterday.

One of the doctors robbed said;

“The first that entered wore a clinical coat. As he entered, he just shouted: ‘This is armed robbery; all of you, cooperate and face down. If you make any move, I will waste your life.’ Three others soon joined him. The first person was holding a pistol and he pointed it at each of us. We lost working tools such as iPads, handsets – some of those phones are expensive – and some lost personal effects. At the end, they left through the backdoor. That was highly curious to some of us. The experience that we medics can be robbed at gunpoint at a place considered our safe zone is really scary.

“The issues that really baffled us include how it happened, despite the security measures put in place by the management. There are suspects – people hanging around that we did not feel comfortable with. The association has lodged a complaint with the Alakara Police Station in Mushin and also with the one attached to the hospital. There was a lady medic in our midst; we thank God that she was neither harassed nor assaulted.”

Another doctor who witnessed the robbery said;

“Some of us were there at the Lounge because we were on call duty; some go there because of the guarantee that there would be electricity. Most of us are sitting for our different examinations; so we read there. Of interest is that the assailants were all in clinical coats. And we deduced that there was at least, one person outside who was giving others signals. There are suspects and the management is already handling the case.

“So also, the security breach baffled us. A security officer was on duty at that time; even if he couldn’t shoot, he should have raised the alarm to attract reinforcement while taking to his heels. We observed that the assailants were in a haste to do their thing and move on. They carted the stolen things inside a bag of a colleague. They even took away log books and case notes meant for the examinations.

“The most disturbing thing is the gate at the back of the lounge. Most people, including doctors, did not know it existed. It was perpetually under lock. But that was their escape route and it was opened. That indicates that it was a well-planned crime involving an insider. The incident is a trauma for some of us. Some of us still wake up with a jerk around that time every day since that fateful day.”