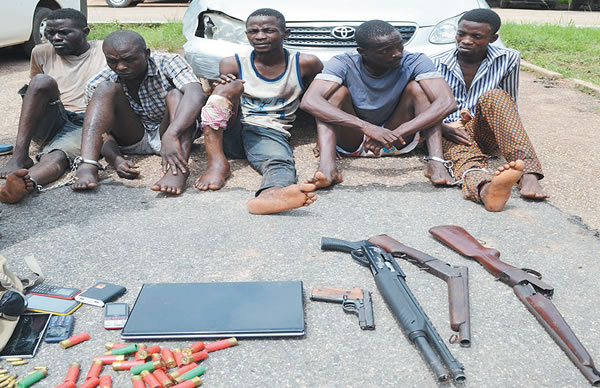 Some suspected robbers who engaged policemen on Patrol in a gun battle during a robbery operation at a filling station in Ogbomoso recently have been subdued.

The leader of the gang was shot dead during the operation, while five others were later arrested.

While parading the suspects at the state police command in Ibadan yesterday, the state Commissioner of Police, Abiodun Odude, said that the gang invaded Ogbomoso on June 17, 2017 around 10pm.

The gang first snatched a Toyota Corolla and used the car as their operational vehicle for operations they carried out that night.

Odude said, “The gang snatched the Toyota Corolla saloon car from Taiwo Ogunyemi at gunpoint and fled the scene immediate.

Similarly, another victim, Gbemiga Oladunni, was attacked by the same bandits who dispossessed him of a large sum of money and a pump action rifle. Not done, the hoodlums unleashed yet another attack on Tetra Abbey filling station where they robbed the station attendants of cash and other valuables.

“However, they ran out of luck when a distress call was made to the police. Promptly, the Special Anti-Robbery Squad stationed along the Ogbomoso/Oyo axis responded. On sighting the operatives, the hoodlums opened fire prompting the SARS operatives to engage them in a shootout that lasted for some minutes. At the end of the gun duel, one of the hoodlums was hit by police bullets while another member of the gang, later identified as Ademola Ajayi (33), was arrested after sustaining gunshot injuries.”

Odude added that the arrest of Ajayi led to the arrest of other members of the gang like Rotimi Awoniyi (21), Sikiru Adigun, aka Lighter (32), Abayomi Olatunji, aka Energy (35) and Femi Abolarin aka Dudu (28).