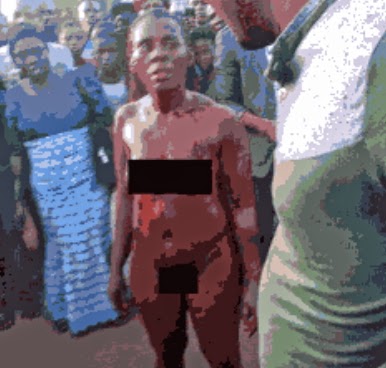 May 28, 2014 – Arrested Female Kidnapper Confesses In Ijebu Ode “I Sell Children For Living”

Pictured above is an unidentified big girl who was recently caught kidnapping a little child in Odi Olowo street in Ijebu Ode off Ondo-Benin road in Ogun state Nigeria.

The woman was beaten mercilessly by a angry mob in the area after she confessed to the kidnapping.

An eyewitness by the name of Sunmola Seyifunmi said the lady initially disguised as a mad woman in the area around 4:30 pm last Saturday (May 25th, 2014).

When she noticed people have ignored her, she quickly entered a home in the area and abduct a little child. 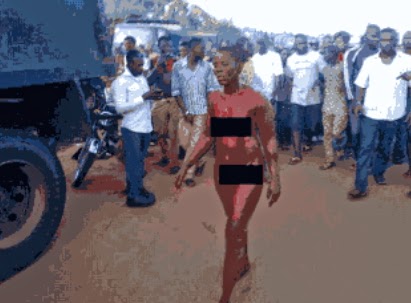 A vigilant area resident who saw her quickly raised an alarm that attracted a angry mob.

After a series of beatings, the woman confessed that she wasn’t mad and that she is a full time kidnapper.

The woman also said she planned to sell the child in order to survive.

From her confessional statement, her kidnapping squad is made up of 6 women who travel between Ijebu Ode to Enugu to kidnap children.

When asked where she got the money from, she said she sold a child to someone and that was part of her payment for the deal.

Police quickly moved in to save her from being lynched. She has been taken to a local police station for investigation.