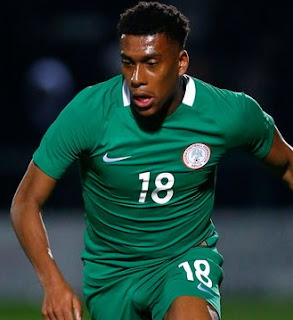 Nigerian footballer Alex Iwobi is being investigated by Arsenal after claims that he went partying just before the Emirate landlords were sent packing from the FA cup.

Mr Iwobi could face huge fine if the allegation proves to be true. Reports claims Iwobi was out partying less than 48 hours before the holders crashed out of the FA Cup with a shocking 4-2 defeat at Nottingham Forest.

The Sun obtained footage that appeared to show Iwobi at a house party in the early hours of Saturday morning.

The 21-year-old Nigeria international completed 90 minutes at the City Ground on Sunday, where goals from Per Mertesacker and Danny Welbeck were not enough to prevent a humiliating reverse against Championship opposition.

Speaking ahead of Wednesday’s EFL Cup semi-final with Chelsea, Gunners boss Arsene Wenger confirmed he would discuss the matter with Iwobi and take action if the allegations were accurate.

“if it’s true he will be fined,” said Wenger, who told reporters he was very disappointed with some individual performances at Forest.

“It is impossible to go out 48 hours before a game. It is unacceptable.

“I will have to see him to see whether that is right or not.

“If he was at a birthday party, how long has he stayed? That is very important. After that I will decide what happens.

“You must have played football, you want to prepare 100 per cent but sometimes it is not a guarantee that you will be at your best. But that is what is requested from a top professional.”