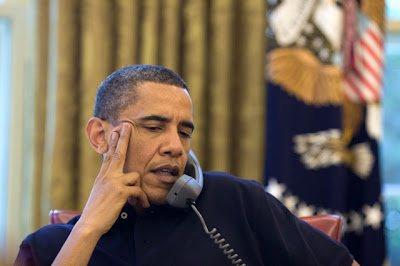 Both Presidents Barack Obama and Goodluck Jonathan wanted to talk on phone, but twice calls from the White House to Aso Rock failed to make the connection.

Authoritative sources confirmed during the week that efforts by President Obama to personally speak with Jonathan to return his congratulatory message has been aborted at least twice by the failure of the telephone system in Aso Rock.

After Obama’ s second-term election victory three weeks ago, President Jonathan was among the first world leaders to congratulate him, offering him a hand of fellowship.

In response to the congratulatory messages, Obama on the Thursday of the same election week, started calling back some of the world leaders, who had congratulated him, to appreciate their letters and words of felicitation.

At least, three White House press statements by Press Secretary, Jay Carney, since the week of the election, have listed names of leaders Obama has been able to speak to in return for their congratulatory messages. Based on those statements made available to The Guardian, the US President has not been able to reach out to the Nigerian president.

But US sources confirmed that President Jonathan is one of those Obama was personally keen on talking to, in acknowledgement of their early congratulatory messages.

Specifically, on Monday November 12, according to US sources, White House officials, having coordinated with the US Embassy in Nigeria, and the Nigerian Embassy in the US, got a number to call Aso Rock, but, on two occasions on that day, both calls were simply not picked up, causing a diplomatic embarrassment for Aso Rock. The number had been given by Aso Rock officials to enable President Obama reach President Jonathan.

A source explained that what should have been done, as is normal in diplomatic etiquette, is for the Nigerian President to have a hotline to reach leaders of other countries that are strategic to the country, so that such important calls are easily facilitated.

Sources close to the Nigerian Foreign Affairs Ministry confirmed the practice and put the blame squarely on Aso Rock telephone system and some of its operators and officials.

Nigeria’s Ambassador to the US, Prof Adebowale Adefuye, confirmed that the US President wants to talk to Jonathan since after the election, but stated that it is yet to happen.

But he quickly added that the plans were still being worked out to make it a reality. He explained further that during this past week, President Obama was away in Asia and then returned for the Thanksgiving celebrations, a big holiday, which Americans mark every third Thursday in November. In most cases in the US, the holiday starts on the preceding Wednesday (November 21) until the following week, which is Monday, November 26.(Source: The Guardian)