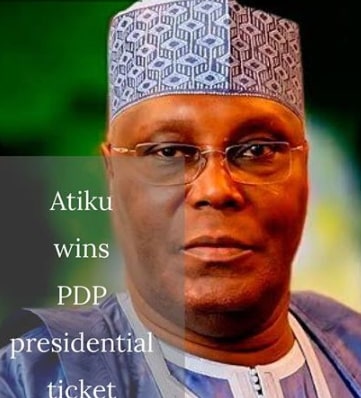 With the emergence of Alhaji Abubakar Atiku as presidential candidate of the opposition Peoples Democratic Party (PDP), it is pertinent to wonder if his much awaited political hour has finally come for the former Customs officer turned mega businessman and politician from Adamawa State. For one, the 12 other aspirants the Turaki defeated in the PDP intra-party elections appear to have united in support of his candidacy at least for now. That was how other defeated presidential aspirants in the historic APC National Convention of 2014 accepted Buhari’s candidacy, refrained from quitting the party and with some even working assiduously for his victory in the general election. Incidentally, President Goodluck Jonathan who later lost the election had been returned unopposed as PDP presidential candidate at a time when Buhari had to face competitive intra-party contest within the APC.

Of course, one cannot read too much into such coincidences because the APC, from all indications, appears to have rallied behind Buhari’s candidacy despite the seeming monarchical coronation that characterized his unanimous affirmation as presidential candidate at the APC’s non-elective national convention. However, it is not out of place to ponder if indeed Atiku’s hour of glory may be at hand given the support he his garnering from unusual quarters. For instance, the Yoruba socio-cultural group, Afenifere, has endorsed Atiku’s presidential bid presumably because of his new found love for restructuring of the polity. This has long been a cherished desire of the Afenifere leaders.

In the same vein, Atiku has been aggressively courting South-East, South-South and Middle-Belt political leaders and groups. Even then, will these zones particularly in the South want to risk electing an Atiku who will most likely have the possibility of spending two terms of eight years in office compared to Buhari, who if he wins next year, will be entitled to only one more constitutional term of four years? I ask this question in the light of the unwritten and informal zoning formula that has characterized political competition especially at the presidential level in this dispensation. Atiku has reportedly promised to spend only one term in office if he emerges as President next year. Do most people believe him? I don’t think so. Yes in picking Mr. Peter Obi from the South East as his running-mate, Atiku has shown that he means business.

No less significant, is the endorsement that Atiku has received from his former boss and implacable foe – the unforgiving and pugnacious former President Olusegun Obasanjo. Obasanjo in characterisc exhibition of self –righteousness, claimed to have forgiven Atiku for his many sins because the latter has apologized to him and demonstrated contriteness and mortification for his alleged iniquities. If Obasanjo had all along claimed at diverse fora that his former Deputy had sinned against God and Nigeria, can he now just casually bestow the benediction of forgiveness on the PDP candidate presumably on behalf of God and the rest of us?

Some analysts have claimed that Obasanjo has only minuscule electoral value. They miss the point. The former President’s political influence far exceeds his electoral value. This was the pithy point made by Chief Obafemi Awolowo when Chef MKO Abiola quit the National Party of Nigeria (NPN) in the Second Republic causing seismic political tremors despite his scanty following in the South West at the time. It is better to have Obasanjo at your ringside when engaging in electoral or political battle. But even then, it is not impossible that he may yet meet his waterloo at the hands of the tactically astute military turned political strategist from Daura.

Again, the question: ‘Is Atiku’s hour of electoral glorification at hand?’ The eloquent and often prescient convener of the Save Nigeria Group (SNG), Pastor Tunde Bakare is seemingly non committal even though clinical in his analysis. In his words: “It is not going to be an Eaglet versus an eagle but an eagle versus eagle: an old eagle versus new eagle and probably both of them old eagles”. Continuing, the fiery cleric surmised “I can’t say Atiku will win or lose. You see, I am not advocating for him. Among all the PDP aspirants, who contested the party’s ticket with him, he is perhaps the most cosmopolitan; he is a Wazobia man… He has been a businessman with business acumen and he has exposure. But you see, that is not what qualifies you to win. A lot comes into play; so, again, I cannot say whether he will win or lose”.

Ordinarily, in my view the next election ought to be a straight walk over for the ruling APC. No candidate on the platform of the PDP should stand even a tenth of a chance against President Muhammadu Buhari. The havoc wrought by the PDP in its 16 year-rule of the locusts that virtually brought the nation to its knees is still all too fresh in the national consciousness. Unfortunately, the ruling APC has committed too many unforced errors thus making it possible for the PDP to even dream of coming to power again so soon at the centre after the horrendous bleeding of the national treasury that took place under its watch.

Luckily for the APC, Atiku seems to be couching his political communication in terms of Nigerians wanting the PDP back in power. Nothing could be further from the truth. To have even a fighting chance of giving Buhari a run for his money, Atiku must, in my view, sell his personal qualities, attributes and achievements while de-emphasizing his mortally damaged party platform. If he must refer to his party at all, Atiku’s bold message to Nigerians must be one of being committed to supporting the institution of genuine reforms within the PDP and more meaningfully re-branding the party and enthroning a new and higher moral ethos as well as ethical standards within the party.

But does Atiku possess the moral integrity and character to project himself as a moral change agent both within the PDP and as leader of Nigeria if elected next year? Most of his adversaries will vehemently answer this question in the negative. For some inexplicable reason, the toga of alleged corruption hung on Atiku has appeared to stick. I find this baffling because to the best of my knowledge, Atiku remains unindicted by any court of law within or outside Nigeria for any acts of corruption. There have been reports of alleged financial infractions in the United States that make it impossible for Atiku to travel to that country. The US government has, however, maintained a studied silence on the matter thus leaving it at the level of unproven and unproductive speculation.

Against a candidate like Buhari, there is no way Atiku can dodge responding fully to the integrity question. For despite his all too obvious flaws, millions of Nigerians still admire Buhari’s obvious disdain for materialism and ostentation in a clime where the criminal plunder of public resources is the pastime of the political /business elite. However, if Buhari does not move fast to distance himself from some of his closest aides and inner kitchen cabinet who have hidden under the banner of his integrity to commit all manner of atrocities as epitomized, for instance, by the scandalous Rasheed Maina affair, the still unexplained cash haul at Ikoyi, or open defiance of court judgement and violations of the rule of law, for instance, he may unwittingly aid the fruition next year of Atiku’s hour.

For now, it is my view that Buhari has done well enough, scoring a slightly above average performance to merit re-election next year. If that happens, someone may likely describe Atiku someday as another ‘best President Nigeria never had’! I wish both Buhari and Atiku best of luck. But the next few months will be crucial.

Obasanjo Is Inconsistent, He May Change His Mind & Withdraw Support For Atiku Before 2019
Vote PDP If You Want Nigeria To Remain Wretched