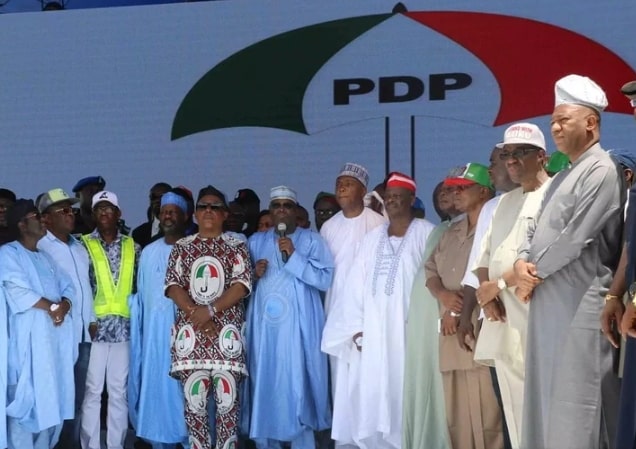 If the Peoples Democratic Party, otherwise known as Pin-Di-Pi, needs to convince Nigerians of its anti-people disposition, it properly showcased it at its national convention held during the week in my own “Garden City”, Port Harcourt, the Rivers State capital.

Nigerians and the world at large have been talking of the country being hit by recession in the last three years due to the recklessness of the PDP administrations since 1999, especially the Goodluck Jonathan’s which was displaced by the current Muhammad Buhari administration in 2015.

Economic prosperity took a holiday from Nigeria during the years of the locusts, with factories closing down and turning millions into the unemployment market while churches were either leasing or buying out these industrial houses.

The business that boomed from all these is majorly okada (commercial motorcycle) business which attracted to its ranks mainly people of Northern extraction, as well as low and medium income workers laid off by redundancy.

If on the profit side these motorcycle riders barely survived, the huge deficit in that business however is writ large in our orthopaedic hospitals and private but mostly insanitary traditional healing homes where broken bones are being mended on a daily basis, from road accident victims of mostly untutored and drug-induced okada riders.

The displacement of the PDP government headed by Dr Goodluck Ebele Jonathan and its succession by the APC regime of BUHARI in 2015 exposed where all the nation’s monies had gone. The ones that grew wings ended in safe vaults in European and American banks and in some far-flung financial institutions in far East Asia while the rest, by just a handful, either got buried in septic or underground water tanks in decrepit places or homes or swallowed by rats, snakes, crocodiles and, you never can tell, hippopotamus of uncommon hue.

For most of the three years of this present administration, it has busied itself unearthing mind-boggling monetary malfeasance never before experienced in this country while it has laboured to get the nation back on course. For Buhari and his team, the task of rediscovery and rejuvenation of the economy has been one helluva fight between it and all forces of reaction spearheaded by PDP mindless conservatives, and edged on by aging revisionists who are busy collecting doles needed for their final rites of passage.

In the last three years, the PDP moneybags recoiled to their shells, like rainbeaten chickens, scared by the EFCC hounds, but began surfacing a few months back because the season of electioneering is here.

Money many genuinely hard working and innocent citizens couldn’t muster for their children’s education abroad because of high rates of exchange, was on the loose in Port Harcourt during the week because the PDP locusts are on the march again, seeking to return to the plundering of the nation’s remaining resources.

The hard currency that could have been used to turn the nation’s economy around was, as usual, squandered to procure votes for presidential aspirants of the PDP. It was repulsive to any decent mind, offensive to our psyche and altogether unacceptable in any sane society. All those involved in buying votes and people’s conscience for as high as 5000 or 10000 American dollars on the Nigerian soil in Port Harcourt during the week, putting it mildly, are unworthy of our trust and should be outrightly rejected at the coming polls. Their return can only portend one thing for Nigeria – taking the country to the graveyard for its final burial.