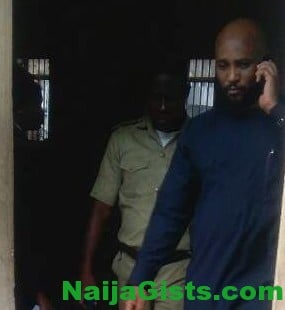 October 18, 2017 – Atiku’s Son Released By Court After Producing Son He Snatched From Wife 4 Years Ago

A court in Lagos today released Mr Aminu Atiku, the son of former Vice President Abubakar Atiku, following his compliance with a court order directing him to produce his son, Amir.

Atiku allegedly kept Amir from the custody of his estranged wife, Fatimo Bolori contrary to the October 11, 2017, court order.

Chief Magistrate Ayeye, in a suit, marked FCL/29/2017 between the applicant, U. F. Bolori and the respondent, M. A. Abubakar, made “an order of emergency evacuation and protection” directing Atiku to produce their son, yesterday, for a hearing of a suit concerning the child’s custody.

But the charge of contempt was dropped when the respondent produced Amir in court.

Mrs A‎yeye ordered that the children should be with their mother for 10 days, pending when permanent living and visiting arrangements will be made.

Further hearing in the case continues on November 1.

Earlier Wednesday the counsel to Atiku’s son, M.O. Enitan informed the court that the parties were making plans to settle the matter out of court.

He asked the court to discharge the “emergency, evacuation /protection order.”

This was opposed by Bolori’s lawyer, Nwabuzor Okoh, who denied ever receiving any notification or information from the respondent that he intended to reach a settlement with the applicant.

She ordered that he be remanded in the transit cell, while the case was stood down pending when he produced the boy.

Fatimo and Aminu were divorced in 2011, and their children were kept in their mother’s custody. It was however agreed that they would be spending their vacations with their father.

However, during one of the school holidays in 2013, Aminu requested that they are released to him for a vacation abroad, after which he allegedly refused to let the boy return to his mother.

Continue Reading
You may also like...
Related Topics:Atiku, son, wife