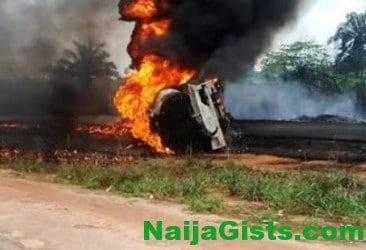 Several people were burnt to death in a horrifying inferno on Wednesday evening following an explosion from a fuel tanker bearing petroleum product.

The tanker driver which was said to be driving recklessly, lost control of the wheel and in a bid to regain balance, tumbled on the expressway near Kyakyama Filling station situating few metres away from the Ogere toll gate stretch of the Lagos – Ibadan expressway.

A witness said the impact of the fall on the tarred road touched – off a huge explosion, sending balls of fire and plumes of dark smokes into the sky.

The Witness added that the fire soon spread and caught vehicles packed by the road side, triggering a stampede and commotion as many scurried to flee the raging fire.

The inferno also caused not a small traffic gridlock as motorists on the expressway made frantic moves to escape the danger.

It is not yet certain how many people that were inside the tanker(truck carrying fuel) when it caught fire but the Public Relations Officer of the Ogun State Traffic Compliance and Enforcement Agency(TRACE), Babatunde Akinbiyi, said field report suggested that three persons were inside the truck.

Babatunde also identified recklessness on the part of the tanker driver as the cause of the accident.