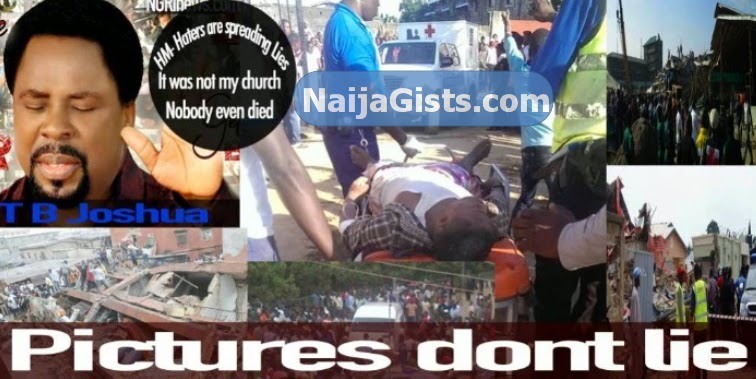 The audio that you are about to hear will shock you, one of the reporters who exposed him was among those who got brutalised at TB Joshua’s church last week Friday.

When the news of reporters brutalisation broke, selected journalists were later permitted to enter the building on Friday.

They were all offered N50K each in brown envelopes by TB Joshua. He urged them not to over-report what they saw on the scene of the tragedy.

The controversial prophet told them to use the money to fuel their cars.

According to Nicholas Ibekwe, reporting of the building collapse in the Nigerian media has been too kind on TB Joshua so he wondered if it could be because of the cash he doles out daily to reporters. Also in the audio, you will hear T.B Joshua ask the reporters – “So, what are you going to write now?”” after offering them the N50,000 for fuel. The reporter answered him: “What you have just said”.

Hear him speaking to reporters in a low tone in the audio below:

Note: The undercover reporter who leaked this audio didn’t take the bribe offered to him by the prophet. He however alleged that all other reporters took the money with joy while they all laughed with TB Joshua before departing the scene.