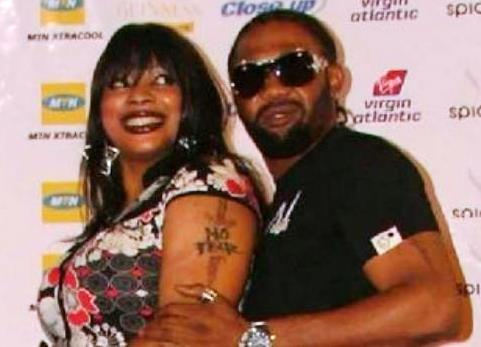 Ex-hubby of actress Ayo Adesanya has let the cat out on her addiction to tattoo.

Omogoriola Hassan claims he spent $5000 to tattoo his name on Ayo Adesanya when she was crying like a baby for it. 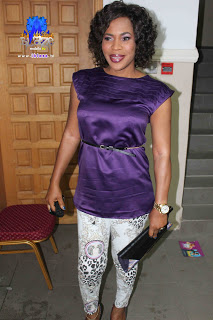 There was a time you’re linked romantically to Fathia Balogun, what is the gospel truth about it?

I have said it before, there is nothing between the two of us.  Fathia is my friend and colleague, no strings attached.  We only met at Omo Mushin (a movie) location, that’s where we got talking.  And she invited me to her birthday in Ikorodu, Lagos.  That was January this year, and I attended.  We’re not dating, it’s just a useless rumour.

What do you think could have informed that rumour?

Maybe because people saw me at her birthday party.  And they know I don’t really go out, I don’t mingle.  People are just insinuating.  How can I be dating Iya Khalid?  And besides, Saidi Balogun and myself are very close and good friends. I can’t be involved in such a dirty thing.

Another key issue, we learnt your estranged wife, Ayo Adesanya has threatened to remove the tattoo on her hand because she doesn’t want to share anything common with you again, how true is it?

(Laughs) I am also aware she said she wants to remove the tattoo on her hand, bearing our logo No Fear, she is free to do that but what about the one on her ass?  How is she going to remove that because she has one on her ass, where my name was written boldly, Omogoriola Hassan.  So, if she succeeds in removing the one on her hand, what is she going to do about the one on her buttocks?  That’s stupid of her.  If at all you don’t like someone again, that does not mean you need to go to that extent.  But I believe, definitely, she is still thinking about me because if she doesn’t, she wouldn’t have thought about removing the tattoo.  Ordinarily to me, what’s a tattoo?  Anybody can have it.  She alone has two, one on her hand, the other one on her ass.  Let’s even agree she removes the two tattoos, will she kill my son, Fareed?  Anytime she wakes up and see Fareed, she has already seen me.  She is just being childish.

Don’t you think it maybe because her new man doesn’t like seeing such a thing on her body?
That means the guy doesn’t like her.  When I was dating Ayo, a lot of people said so many things about her, I didn’t even care.  When you like a woman, you must like everything about her, good or bad.  That’s how it should be. I don’t think what she said made any sense at all.

Is it true you’re the one who did the tattoos for her?
Yes, I spent $5,000 for her tattoos alone.  They were done on Wilton Street, Chicago, United States of America.

When exactly was that?
That was about eight years ago.

Did she actually demand for tattoos?
Yes, she was crying like a baby, begging me, ‘Please, I need your tattoo on my hand and ass.” I now said, no problem and I obliged.  I am even sure she can’t remove the tattoos, she is only joking.

Why?
I said she can’t remove them, she also knows.  She is only joking.

What would you now say is the lesson you have learnt from your past relationship?
Not to trust anybody, but just yourself because nobody is going to be like you.  The person you trust may eventually disappoint you.  Then I was the greatest fool but today I am the wisest and happiest.  Marrying Ayo then was like boarding a ‘one chance’ vehicle.  It was like I could never come across a woman I can love like that, not knowing I was just being foolish.  If not that she had a baby for me, I should have revealed a lot of things about her.  I am sure, if I say all those things, people can just kill he but I won’t do that because I am a man.  Let me just keep them to myself alone in the interest of our only son.  But I was agitated when I read that she wants to remove my tattoos in China and all that.  That’s childish of her.

Ladies, can you tattoo your husband’s name on your body?