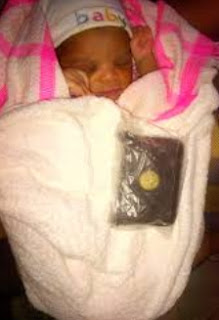 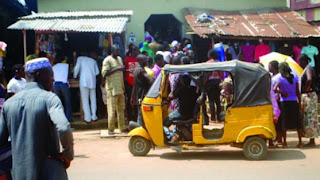 Few years after the discovery of a baby boy with Quran in Lagos, another one has surfaced and this time around it happened at #9 Oguntade St in Shasha area of Lagos state.

Though incident like this appears to be impossible scientifically but witnesses and area residents said it is true. Some even said they saw the baby holding on to a small version of the Quran (holy books of Muslims).

According to the baby’s mother, a 32-year-old hairdresser, Kabirat Lamidi, she has been unwell since she got pregnant.

She said the baby was not born until after 11 months. She went for Ultrasound and it revealed an object in the womb with the baby.

“I have been hearing about such incidents and I have always insulted people thinking it could never happen. I believe it is a gift from Allah,” she said.

“My advice to people is that they should henceforth watch their mouth. I didn’t believe before now,” she said.

According to Mrs. Saudat Olawuwo, a staff nurse with the Shasha Medical Centre,
“By the time I came the day she was in labour, the baby was already coming out. So I assisted her.

“After that, we were expecting the placenta, but the woman began behaving like one about to run mad. I was so confused.

“The woman was shouting that she wanted to push again and all of a sudden, the Quran, wrapped in nylon and stained with blood jumped out.

“Out of confusion, I ran out and called people who came to see. We also called a Muslim cleric around the area who came and prayed for the baby,” she said.

Father of the baby, Luqman Lamidi, said he was in a drinking bar when he was called and told that his wife had delivered a baby with a Quran.

He said he did not believe until he came and saw the Quran covered with blood.

“I arrived home and saw a lot of crowd and could not even enter. In fact, I am surprised that a drunk like me could produce a child that came into this world with a Quran,” he said, adding that he had become a changed person.

Chief Imam of Oguntade, Shasha, Alhai AbdulRafiu Opeloyeru Oyedokun, said he was the one who tore the nylon from the Quran after he was called to the place.

“When I came, people were still doubting if the object was a Quran or not, so I tore the nylon with blood on it publicly and everyone confirmed it.”

Wonders never cease to end in this part of the world.

A baby born with a Quran….

Do you believe the story?