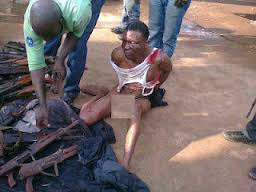 Anambra State Police Command has rescued an 11 month-old baby from kidnappers. Four suspects were arrested after a gun battle.

It was gathered that Kamsi Okeke, daughter of Pastor Louis Okeke of the Foursquare Gospel Church, Awka, was kidnapped from her father’s house at Ngozika Estate in Awka last Wednesday.

The suspects collected the Automated Teller Machine (ATM) cards of Pastor Okeke and his wife Franca.

Though the police did not confirm the incident, a senior police officer, who pleaded for anonymity, said one of the kidnappers, who was hurt in the gun battle, assisted with the arrest of three others.

“It was not an easy battle with those hoodlums at Nteje in Oyi local government area, where they kept the small girl but nothing happened to our men.

“The condition of one of the suspects is critical, but he is receiving treatment. Can you believe that the gang leader is the mechanic of the victim’s father?

“Those suspects destroyed the man’s house with bullets and went away with their ATM cards,” he said.

Pastor and Mrs. Louis Okeke praised the officers for rescuing their daughter without ransom. “We feel relieved, we feel alive again, we almost died but today, we can sleep and give thanks to God for keeping our daughter alive,” they said.