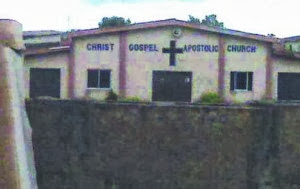 The church where the mishap happened

To counter the claim that a baby girl was buried alive yesterday at a church located in Egbeda area of Lagos State Nigeria, the officials of Christ Gospel Apostolic Church have released an official statement.

The initial story stated that a 2-year-old baby girl was allegedly buried alive at the church’s compound.

The management said the baby actually died before she was properly buried, stating that it was a church member’s child.

“You can see that the church was not closed despite the problem with the police,” a top member of the church said.

The officials said they’ll not release any further information concerning the matter in order not to jeopardise the police investigation.

The pastor in charge who was earlier arrested by the police has been released as the child’s parents remain in custody of the police.