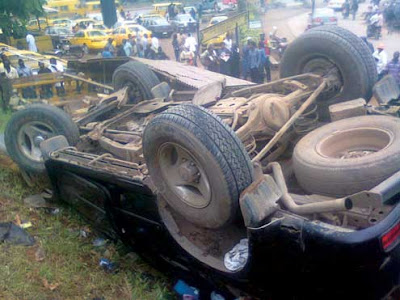 A one year old baby girl and her mother narrowly escaped death today as their SUV fell of Dopemu bridge on Lagos-Abeokuta expressway, Lagos State,Nigeria. naijagists.com

According to an eyewitness of the accident, as the SUV driver was trying to manoeuvre his way to avoid a head-on collision with a bus driver who was driving against the traffic, the SUV with plate no UB 787 AAA fell off the bridge.

The commuter bus the driver was trying to avoid immediately sped off to escape arrest by Lagos traffic control officials located at the Dopemu Roundabout.

The occupants of the Sport Utility Vehicle are:

Miraculously, the 3 of them escaped the tragic plunge unhurt.

They are currently being treated for shock at a private hospital in Idimu.

This is quite miraculous!