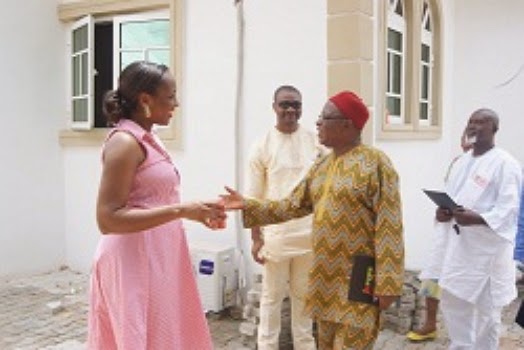 An eight- month- old baby stolen a fortnight ago in a church in Asaba has been returned by unknown persons.

Daresimi was returned under the cover of night last Friday to the Pentecostal Church where it was stolen.

The child was stolen by a mystery woman while her mother, a chorister, was singing in the choir a fortnight ago.

The development elicited wild jubilation from members and the Olaleye’s family.

The Nation gathered that the child seen within the church premises at about 7.00pm on Friday with a letter strung to his neck.

Daresimi’s father, Victor, said the child was discovered at the entrance of the church with a letter attached to his neck.

He said, the thief stated in the letter stated: “Please, you people should forgive me. I did not mean any harm. I am a childless woman, a pastor of a church directed me to steal a child and keep it for 14 days and that at the end of the last day I will be able to get pregnant and give birth to children of my own. So I acted on the instruction that very pastor gave to me and again you can see that the child is healthy, because I took care of him. I am troubled I could not keep the child as I also learnt that the pastor of the church where the child was stolen and the entire church has placed a curse on me.”

Olaleye also quoted the thief as saying, ‘I am using the opportunity to beg God, the church and the parents of the boy to forgive and reverse the curse placed on me and also pray for me so that I can have children of my own.”

The Nation gathered that the letter is with the Police ‘A’ Division, Asaba, where the matter is being investigated.

The relieved father revealed how the news was broken saying, “When the pastor phoned me that there was a baby that had been found in the church premises, I did not believe that it could be my child but when I got there and discovered that it was my eight month old baby boy, I was full of joy and began to praise God and worship Him for His mercies towards the family. My wife Chioma could not hold herself but burst into tears of joy.”

He added: “We are happy, my family is thanking all, particularly the church members who prayed and fasted with us within the 13 days the child was missing. We also thank the police for the prompt attention given to the matter.”

Church Pastor, Godfery Oshilim, said the baby was founded by church members after he heard cries in the church premises.