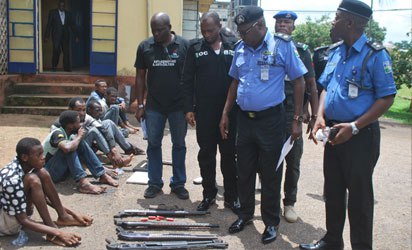 A Special Police team on Monday arrested 4 men in connection with the wicked activities of the notorious Badoo killer gang.

The team led by Deputy Commissioner of Police (DCP) Operations Imohimi Edgal found five graves and a shrine said to belong to the gang in Agbowa. One of the graves was said to be freshly dug.

Those arrested were one Alhaji Tijani Awoyemi and the shrine’s alleged operators, Alhaji Alaka Abayomi, Junior Christian and Owoyemi Bamidele.

One of the policemen who went on the operation described the shrine as one of the biggest in Ikorodu, adding that it belonged to Alhaji Abayomi.

The source said baskets of broken eggs and other items used for sacrifices as well as figurines were found in the shrine.

He said: “The shrine is situated on a large expanse of land surrounded by thick bushes. We saw five graves. One of them looks fresh. We couldn’t enter some of the rooms because they had iron doors.

“We have arrested the owner of the shrine in the thick forest of Agbowa, Ikorodu. We have also arrested three others, including the operator of the shrine. They are the major suspects in the killing of a couple and their two children on Sunday.

“The Obas in Ikorodu should know that their exalted offices have privileges and responsibilities. They have subjects within their domains. They should compel their subjects to notify them of new people moving into their areas.

“The activities of Badoo are an internal crime. No one would come from outside to wreak havoc in Ikorodu because the area has been cordoned off by the police.

“The traditional rulers would sit down and watch people being killed in their domains and they won’t say anything. They should discourage their subjects from building inside the bush and living there.

Continue Reading
You may also like...
Related Topics:police, Ritualists, victim