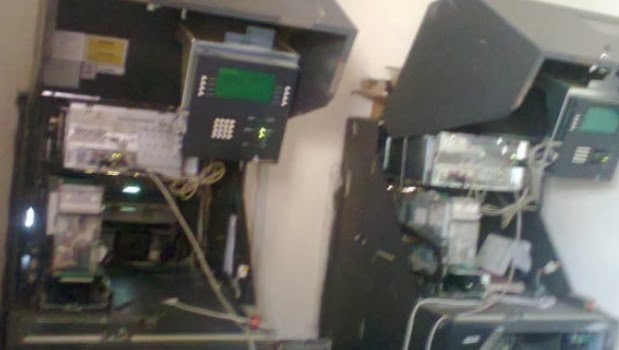 Some armed robbers on Tuesday destroyed an ATM at a new generation bank inside Adekunle Ajasin University in Akungba-Akoko (AAUA) campus, Ondo State and stole an undisclosed amount.

We learnt the dare devils did their operation between 1am and 3am at the ATM opposite Olusegun Obasanjo Hall undisturbed.

According to students, 5 gunmen armed with 2 AK47 riffles entered the campus through the southern part of the university.

On getting to the ATM spot, they met 2 security guards and 3 sheriff deputies. They reportedly tied them up throughout the operation.

They entered the ATM room by cutting the door with electrical metal cutters.

A student, who requested anonymity, said: “We discovered that they attempted to open the ATM of an old generation bank when we got to the place this morning.

“I think they could not dismantle the ATM because it was already dawn and they were afraid of being attacked by students.”

The management of the university, led by Prof. Femi Mimiko, has visited the scene of the incident.

Police spokesman Wole Ogodo who confirmed the robbery said nobody has been arrested.