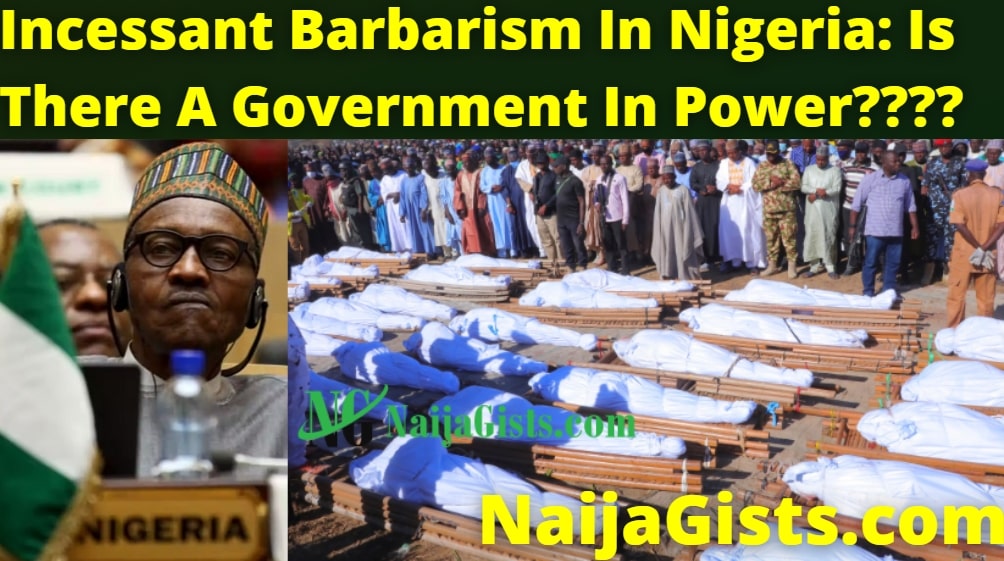 If we are not careful, Nigeria is going the way of the Roman Empire.

“None of my children will go to school again” – Mrs Alhari Emmanuel, mother of Deborah Samuel, murdered by Sokoto Muslims. May 15, 2022.

2 weeks ago, the UNICEF reported that 10 million Nigerian school-age girls are out of school. It is by far the largest number of kids not in school in any country, including China and India, with seven and six times Nigeria’ s population. For that matter, there is no country in the world today whose public universities are shut down and the students roaming around; research not being conducted and journals are not being published.

Nigeria is the only exception. Is there a government in power? To me no serious government can exist in a country where education has collapsed to this extent. Barbarism has taken over.

Edward Gibbons, the author of one of the greatest history books – THE RISE AND FALL OF THE ROMAN EMPIRE – has revealed to mankind (at least those who bother to read history) that civilizations and nations disintegrate very slowly.

The destructive elements don’t arrive in one year and demolish the frameworks of the peoples’ way of life. Several of them arise at about the same time and each wrecks one of the fabrics of society while people are not paying attention.

Barbarians eventually invaded the Roman Empire and brought it to an end one day at a time. They created insecurity in so many communities, which overwhelmed the Roman authorities before the government itself fell and long periods of internal warfare followed. If we are not careful, Nigeria is going the way of the Roman Empire.

Four reports and their repercussions on our lives should frighten all those among us who can still think deeply. The four involve insecurity, economy, education and agriculture. Because it is involved in the other problems we now have, insecurity has become the most important issue. And, it is here that barbarians, bandits and gunmen have the upper hand.

It is now unanimously agreed that nobody and nowhere is safe in Nigeria today; perhaps not even Aso Rock. But, most people are not aware of the depth of our helplessness. Let me explain as best as I can.

When the Roman satirist, Juvenal, asked that question, he probably never imagined a situation in which the security forces themselves would be endangered by the citizens. This is the situation here in Nigeria today.

The armed forces of Nigeria, particularly the police, are supposed to guard us and provide security – without which very little can be achieved in the country. Our most recent experience would indicate that our security people have become endangered themselves. They are gradually becoming overwhelmed by the sheer number of barbarians, bandits and gunmen. The following reports will help to illustrate our predicament.

On the same day Mrs. Emmanuel spoke, it was reported that 323 security personnel were killed from January 1 to May 15 of this year – mostly in four zones of Nigeria. North-West and North- East lead the table; followed by North-Central and South-East. What makes this development most disturbing is the fact that, in most of these cases, hoodlums actually went in search of soldiers and policemen to eliminate. Obviously, gone are the days when criminals go into hiding at the mere sight of an officer.

Two recent attacks in Taraba State have signaled the dangerous change taking place in our country. On two occasions, bandits actually attacked army barracks and killed dozens of soldiers. Clearly, the intention is to let civilians know that they are unsafe from attack – if soldiers can be slaughtered at will.

On the same day the story of the 323 security men killed was published, another story announced that Federal Government’s negotiations with the abductors of train passengers was stalled; and the FG was seeking foreign assistance. That is the clearest admission of omnipotence by our government.

Buhari’s government has told us that it can no longer protect us; it needs help. But, out-sourcing our security is now very dangerous in a world where the West and the US are fighting proxy wars with Russia. As soon as the FG calls in one “protector”, the other weighs in against it. Eventually, the situation will get out of our control.

ON THE ECONOMY: HERE IS THE NEWS
“If ignorance pays dividends, most [Nigerians] could make a fortune out of what they don’t know about economics (amended)” – Luther Hodges, 1898-1974.

The surest way to destroy a country, even one relatively peaceful, is to destroy its currency. Surely everybody remembered the CHANGE slogan before the 2015 elections. There was a change quite alright. It has been absolutely disastrous. Nigerians were just not told about it. So, read what the change merchants of APC have done to Nigerians.

That the Naira has been battered in the last seven years is a fact which only FG officials and members of the All Progressives Congress, APC, can deny. The evidence on this one is simple to provide, there should be no need to waste a lot of time on it. In 2015, the official exchange rate was N195/$US1. The black market price ranged up to N230/$US1.

To add insult to our injury, the Buhari administration, which has done more to impoverish us, wants another APC government to follow in 2023 and ruin Nigeria totally. Mark my words; something will happen in this country because we cannot continue this way for long.
To be continued….