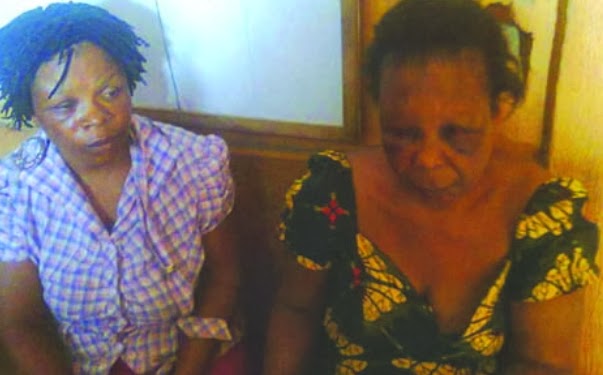 Two Nigerian women are currently cooling off in police detention after they were caught in a baby trading deal today in Lagos State Nigeria.

Police Detectives at the State Criminal Investigation Department, Panti, Yaba, Lagos, western Nigeria have intensified efforts to recover all the stolen babies allegedly bought by an Onitsha-based human trafficker who was arrested in Lagos last Monday for purchasing a stolen two-year old baby.

This followed the confessional statement made by the trafficker, Mrs. Grace Onye, 52. Onye told the police that she specialises in the illegal business of buying babies in Lagos for sale to those who required them.

She was arrested along with her customer, 45-year old Mrs. Ngozi Ikeh who is barren and needed a child.

They were arrested at Ikotun in the morning while going back to Ontisha with a stolen baby sold to them for N300,000 by their contact man who is now at large.

The suspects confessed that they had a contact man simply identified as Samuel who usually lodged them at Francis Inn Hotel located at Abiola Adeyemi Street, Igando Road, Ikotun whenever they are in Lagos to buy babies. Grace confessed further that it was in that hotel that Samuel brought the baby and collected N300,000.

Samuel abducted the baby at the stated address in a dramatic form around 4 p.m. on Monday when he threw a banger in the compound where Joy was playing with other kids.

The sound of the banger caused confusion in the compound and the children ran away in different directions. When the dust settled, Joy was nowhere to be found.

Her elder sister, Eniola Olowolade, after a frantic search for her, alerted her parents, Ayodele and Funke Olowolade, of her disappearance.

Funke explained that one of her neighbours confirmed that she saw the man who snatched the baby during the confusion that greeted the explosion of the banger.

Olowolade and neighbours later arranged themselves in groups to look for the missing baby. They searched for Joy in every house and street in the neighbourhoods but could not find her.

Narrating her experience, Funke stated: “It all happened like a dream, Joy told me she was hungry  and I was preparing her food when she went out to play with her friends in the compound. Within the twinkling of an eye Eniola rushed in to tell us that somebody threw a banger in the compound and everybody ran away. She said she didn’t see Joy when the commotion died down.

“We searched all the nooks and crannies till midnight. She was nowhere to be found,” Funke said.

At about 4 a.m. the following day, the Olowolades and their neighours moved round the streets again looking for Joy. They saw a woman walking briskly and carrying a baby on her back with her friend. Somebody shouted the name of the missing baby and Joy answered ‘ma.’

Immediately the baby answered, the trafficker and her friend ran. They tried to drop the baby but they were caught by the rescuers. They were beaten and later handed over to the police at Ikotun division who transferred them to the SCID for further investigation.