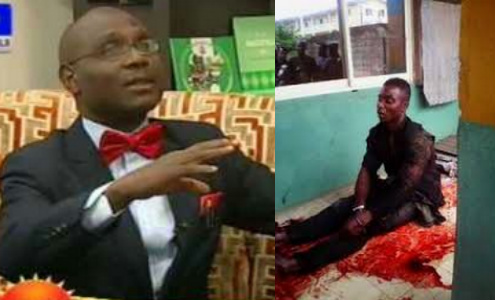 A popular Lagos-based lawyer, Barrister Kunle Fadipe has been murdered in his own home in Lagos state Nigeria.

He was stabbed to death on Thursday night by an invader at his mansion in Harmony Estate in Ifako Ijaiye.

According to PM News, a resident who craved for anonymity, at about 11:30 p.m. when the estate was plunged into darkness following power outage, the lawyer sent his son to go and switch on the electricity generating set. And as the boy came out from the house the assailant who was armed with a knife seized the boy and ordered him to take him to his father.

The source further explained that as soon as the man got to Fadipe he stabbed him in the neck and back before his daughter ran out of their apartment to call for help.

“One of the security guards in the estate rushed in and as the knifeman was trying to snatch the guard’s gun, another guard came in and shot the man in the leg. He was eventually overpowered and arrested but before then the man had also stabbed Fadipe’s mother in-law, son and daughter,’’ the eyewitness said.

When P.M.NEWS visited the scene this morning, scores of sympathisers had gathered at Fadipe’s house. The Chairman of Ifako-Ijaiye Local Government, Toba Oke, Comrade Lawal Balogun of Committee for the Defence of Human Rights, CDHR, the Divisional Police Officer in charge of Iju Police Station, Olatunji Ajimuda, Mrs. Folasade Daniel who is the acting DPO of Pen Cinema Police Station, as well as the Police Area Crime Officer at Area ‘G’ Police Command Ogba, were all there.

The motive for the attack could not be immediately ascertained. However, the police said they had taken the suspect into custody and that the incident would be thoroughly investigated.

A woman identified as Mama Bola, who was crying uncontrollably, said she is one of those who benefited from the free legal services of the late Fadipe.

She appealed to the authorities to ensure that the perpetrators of the attack are brought to justice speedily.