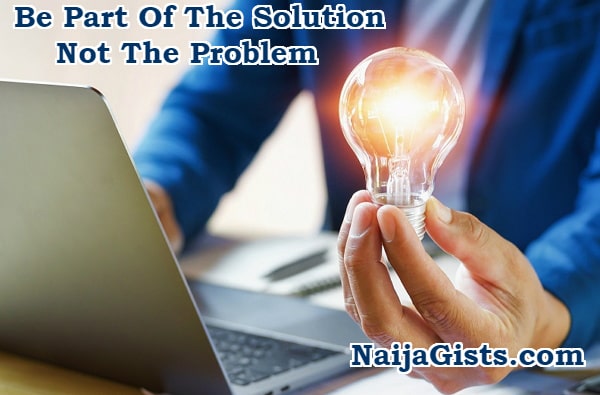 Be Part Of The Solution, Not The Problem

In life, it is either you are creating or you are criticizing. You can never have ample time for both!.

Maya Angelou once said, “If you don’t like something, change it. If you can’t change it, change your attitude. Don’t complain”. It is either you are a path-finder or fault-finder. When we are always on the lookout for faults, we will seldom find paths.

Counting and magnifying other people’s faults and mistakes doesn’t make you a saint or better than them. Anybody can criticize, what distinguishes you from others is what you are creating.

Abraham Lincoln once said, “The best way to predict the future is to design it”. Instead of complaining about your situation or criticizing others, why don’t you create something to solve the problem?.

Marcus Cicero once said, “I criticize by creation, not by finding fault.” If you have to criticize, let it be through creating something new!.

Many years ago, the late Steve Jobs got into a disagreement with a Gawker blogger, Ryan Tate, who criticized an Apple advertisement that claimed the iPad was “a revolution.”

Mr. Tate argued that the term “revolution” was synonymous with freedom and on that basis, disagreed that the iPad was revolutionary. After an email exchange between the two, Jobs ended the conversation with the words, “Do you create anything or just criticize others and belittle their motivations?” Many times in life, we are just like Ryan Tate, always looking out for what we can criticize in others without creating value!

One thing is clear: statues might be built of Steve Jobs someday, if they aren’t already, but I think we’d be hard pressed to find one of Mr. Tate.

As Jean Sibelius said, “A statue has never been erected in honor of a critic.” And maybe your goal in life is not to have a statue in your honor anyway, but if all you do is criticize and you don’t create, if all you do is belittle and you don’t build up, rest assured that no matter how big a failure the person who tries might turn out to be, they’ll still be a thousand times better off than anyone who doesn’t try at all.

We are living in a world where it is so easy to criticize than to complement. The disease is everywhere, from classrooms, to family houses, to workplace, meetings, religious institutions, and so on.

Some toxic people don’t ever have compliments to throw at others, the only thing they throw is ‘blames’. The most malignant ones can even make you believe you are unworthy, incompetent, and even unlovable. They come to the table always to criticizing without creating any value.

The people we live with are imperfect human beings. They have faults; they make mistakes and let us down on many occasions. We must make allowances for people’s mistake instead of magnifying it. When we so much focus on finding faults in people, it becomes all that we will ever see! We must have a keen eye for finding solution instead of finding faults.

Many relationships and marriages would have matured to fruition if the other person was not a fault-finder. Baylor Barbee said, “Relationships fail because people take their own insecurities and try and twist them into their partner’s flaws”.  Someone once said, “Criticism is the disapproval of people, not for having faults, but having faults different from your own”.

If you’re finding yourself critical of or angry or disgusted with someone, you’ve likely had tunnel vision on their imperfections. Sit down and make a list of their strengths and what they contribute positively. Some people are only skillful in pulling others down. They lack the ability to encourage and empower others. Don’t join them! Benjamin Franklin said, “Any fool can criticize, condemn and complain and most fools do.”

Most times the only visible outcome of consistently finding faults in others has always been resentment.

Brainstorming attacks the problem by evolving viable solution while blaming others evades the problem and attacks the person. Blame-storming kills initiative and reduces people’s morale. I have come to realize that when we truly brainstorm, we will have less time to blamestorm.

Blamestorming has destroyed countless relationships, organizations, partnerships, businesses, families and marriages. Whether in the work place, at home, in church, we must create an environment that disallows blame-storming. We must inculcate the culture of brainstorming.

Ken Blanchard said, “People who feel good about themselves produce good results”. As parents, leaders, and entrepreneurs, we must learn to appreciate and affirm people’s worth. This will help them give their best. Stop the blame game and invest more in helping people be the best version of themselves. John C. Maxwell said, “What we appreciate, appreciates”.

If you really have to criticize, then follow these five steps:

(1) Think before you speak. Before you dish out criticism, pause and consider whether you really need to say anything at all.

(2) Be realistic. Critical people often have very high expectations of those around them. It’s possible your tendency to criticize stems from expecting too much from those around you. If you find yourself consistently annoyed or disappointed with others, it may be a good idea to adjust your expectations.

(3) Depersonalize other people’s actions. Oftentimes, critical people have a tendency to personalize events that occur around them. This can bleed out into personalizing the actions of others.

(4) Separate the individual from their actions. Critical people are often guilty of filtering. This means you only focus on the negative aspects of a situation or a person, failing to see good qualities alongside negative ones.

(5) Focus on positives. Oftentimes, being critical results from how you’re choosing to see a situation. Everyone has flaws and imperfections. However, the vast majority of people have good qualities that outweigh these flaws. Try to focus on a person’s positive qualities over their negative ones.

I want to specifically reach out to parents to have a renewed perspective towards their children’s mistakes. Children need models rather than critics. Children will surely make mistakes, we all do! When we yell at children for making mistakes, we ultimately kill their ability to innovate. Mistakes and errors can become spring board to greater height if we take ample time to brainstorm instead of ‘blame-storming’. Henry Ford said, “Failure is simply an opportunity to begin again, this time more intelligently.”

We are not perfect; we have flaws, and we make mistakes. These characteristics do not make us worthless, they make us worthy. Children must be made to know that mistakes are integral part of the learning process and should not always receive bitter words every time they flounder. Mahatma Gandhi said, “Freedom is not worth having if it does not include the freedom to make mistakes”.

Whether in relationships, organizations, businesses, we must create the atmosphere for people to make mistakes and learn from it. The consoling truth is that mistakes are the only infallible evidence that we are human! Tony Robbins said, “No matter how many mistakes you make. You’re still way ahead of everyone who isn’t trying”.

To all the leaders out there, you are not in that position to find faults; you are there to solve problems. Don’t be a fault-finder; be a path-finder. Whether in relationships, mentoring, parenting or supervision, try to always create and stop criticizing.

QUOTE OF THE WEEK:  “Criticism, like rain, should be gentle enough to nourish a man’s growth without destroying his roots.”– Frank A. Clark

Continue Reading
You may also like...
Related Topics:problem, solution

Seeking Validation From Others Invalidates You! Stop Waiting For People’s Acceptance, Live Your Life On Conviction
Be A Mentor Not A Tormentor!