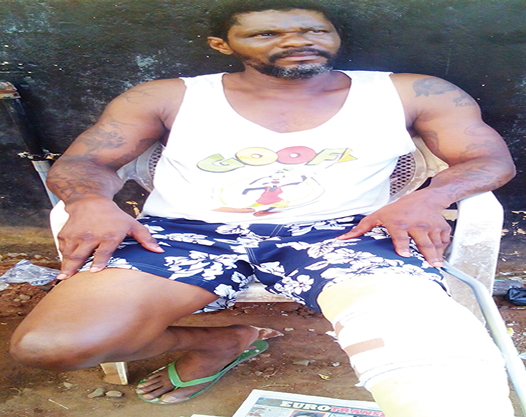 Meet 31-year-old Daniel Owie a Belgium based businessman. He is currently being held in the detention by the Edo State Police Command. Besides, he is being helped to walk with crutches. Faced by a bleak future, the young man is at crossroads and justice appears far from him as he beckons on concerned members of the public and civil society groups to prevail on relevant authorities for help.

That was after an ugly encounter with men suspected to be soldiers in the state. His plight is presently the puzzle that is rattling authorities of operatives of the Edo State police command and the 4 Brigade Command of the Nigeria Army, Benin. Owie was brutalized and seriously battered with bullet shots in the leg at Ihama, a high brow area on Government Reservation Area (GRA) by some ‘soldiers’ in the capital town.

The victim had in a petition by his counsel, Mr. Benjamin Iluobe, appealed to the Inspector General of Police, Mr. Solomon Arase to direct the Edo State Commissioner of Police, Mr. Chris Ezike, to carry out thoroughly investigation into what he tagged as abuse of power by an army Captain and his men.

The family had alleged a conspiracy theory against the man, whose leg was battered by bullets fired by a soldier. But the authority of the 4 Brigade command, Benin, said the man was a member of a robbery gang that operated in Benin, the state capital. Owie, in his petition, appealed to the IGP to investigate the alleged murder attempt on his life and the breach of his fundamental human rights by a group of soldiers led by the army captain.

Narrating his ordeal to newsmen at the state command, Benin where he is presently being detained, Owie said:

“I am based in Belgium. I came to Nigeria for a burial of a mother of a friend of mine. This incident happened at about 8.pm between me and the military men.”

“That day, it was a bit heavy with rain in the month, 3rd of October and there was flood. So, I stepped out of the car to tell this very guy on a Mercedes C-Class that he should move so that we can pass because the other place is covered with flood. He didn’t respond. Then, I asked again, please sir, move your car. The next thing, he stepped out of the car with a heavy punch in my eye.”

“I told him, this is not fair and he said, I had no right to tell him to move his car; that if I knew who he is and I said I don’t want to know who he is, that he should move his car. Then, before I knew it, he beat the hell out of me ith his colleagues. Then, they called for backup and one Operation Thunder storm vehicle came and the Captain gave them orders to take me.”

“I found out that I was on the ground and they were still smashing me and I was trying to protect my ribs but I failed and then when it came to the point I felt like I was going to die, I told one of the soldiers that I want to pee. When I stood up wanting to walk a meter to pee, the Captain shot my leg nd said that I wanted to run.”

He stated that when the incident happened, “we were three. I, my younger brother and a friend of mine called Kelvin and we were coming from the burial by Ihama. I live not too far from there.” But in a swift reaction, the Public Relations Officer of the 4 Brigade of the Nigerian Army, Benin, Capt. Joseph Unuakhalu, said Owie was a member of a robbery gang, who robbed an army officer along Ihama road on the fateful day and was arrested by personnel of the Nigerian Air Force.

In a statement by Unuakhalu, the army said: “At about 10:30pm on October 3 2015, troops of 4 Brigade Garrison, responding to a distress call, rescued an army officer, who was attacked by suspected armed robbers at Ihama Junction, along Airport Road, Benin city.”

The 4 Brigade spokesman said: “During the attack, the officer’s index finger was cut off by the suspected robbers. Earlier, the gang robbed two policemen from Lagos Command, who came for their colleague’s wedding. Prior to the troops’ arrival, personnel of the Nigerian Air Force close to the scene responded and arrested one of the suspected robbers, Mr. Daniel Owie, while others ran away abandoning a Kia Sportage Jeep with Reg No EDO BEN 190 BR.”

He added that: “He was handed over to our troops on arrival. However, the suspect attempted to escape and was shot on his left leg. The suspect is currently receiving treatment at UBTH while investigations are ongoing.”