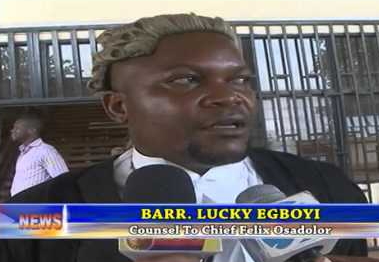 The Court of Appeal sitting in Benin City, Edo State, has freed a Benin Chief Priest, Chief Felix Osadolor, who was sentenced of death for the assassination of Chief Sunday Ahanor, the Eson of Benin Kingdom.

An Edo State High Court had in 2010 sentenced Osadolor to death over his alleged involvement in the murder of Chief Ahanor.

Other persons found guilty and sentenced to death alongside Osadolor were Ogbemudia Omoruyi and Oluwafemi Aihevbva.

In a judgment read by Justice Anthony Ogakwu, the appellate court held that the lower court erred for giving the conviction on mere suspicion instead of through confessional statement and eyewitness account.

The court held that the appellant did not make any confessional statement, while no account of any eyewitness linked the appellant to the crime.