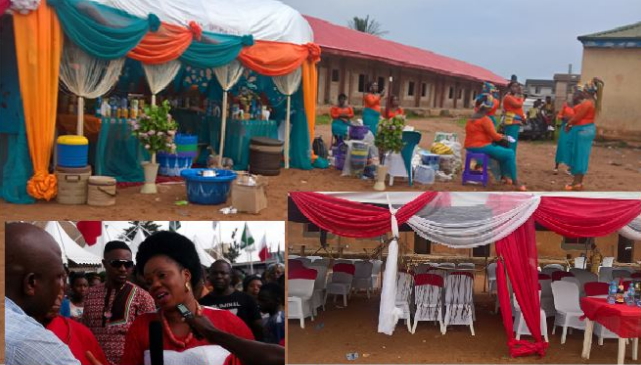 The family of Uhumwangho from Isi village in Uhunmwode local government area has incurred the wrath of the new Oba of Benin, Oba Ewuare II for organising burial ceremonies of their father against his order.

The newly installed monarch has placed a prohibition order on burial activities in the kingdom till further notice.

All was set for the social dance of the burial ceremonies at Iguodala Primary school in Benin City when chiefs from the Oba’s palace stormed the venue and tied ‘Umehe’ leaves on the food, drinks and canopies.

The ‘Umenhe’ leaves indicate a message of no trespass from the Oba.

Some of the family members were arrested and taken to the palace.

The musician hired to provide entertainment was also dragged to the palace.

Sources said the musician pleaded that he was informed by the family that some chiefs at the palace gave the family nod to perform the burial.

Palace sources said the family members were asked to buy some sacrificial items to cleanse the land.

When our reporter visited the venue of the burial ceremonies, the family members were looking forlorn.

They gathered in clusters apparently discussing the setback.

They were food and drinks on the tables, which the family members said they would not touch because of the sacred leaves tied to them.

One of the arrested family members, Josephine Ehimwenma, said they went ahead with the ceremony after some Chiefs at the palace asked them to go on with the arrangements since the actual coronation has been done.

She said the family was not aware that the ban was still in place.

“Three days ago I reached the palace and I met some chiefs and told them that I have buried my father that I just want to entertain friends and well wishers.

“They said I should go ahead and demanded for chop money. I gave them N500 but claimed she could not recognise the chiefs she met.”

A member of the Iwebo Palace society, Chief Sunday Okhiokpamwonyi, said the family will pay some fines and postpone the burial.