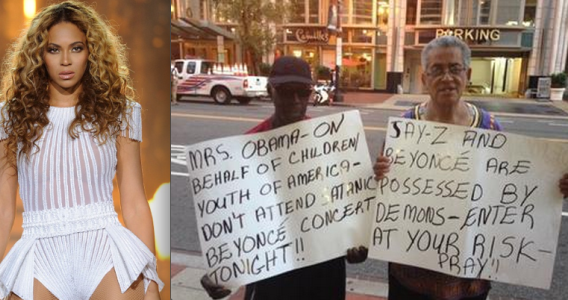 2 male protesters recently caused a scene after setting up a banner in front of Verizon Center in Washington, DC during Beyonce’s Mrs Carters concert.

The activists informed the concert attendees that Beyonce and Jay Z were possessed by demons and that people should be warned.

One of the protesters named Rocky Twyman, the founder of the Pray at the Pump movement said;

“We believe that this couple is virtually destroying our youth. If you go on the Internet, you’ll see stories about how they’re both part of the Illuminati and you can see Jay-Z’s use of the Satanic triangle symbol when he performs.”

“Jay-Z even declared himself to be God by referring to himself as Jehovah, and we don’t think that this is the image that our young people need to be glorifying.”

Rocky Twyman plans to take his protest to every city where Beyonce will be performing throughout the world.