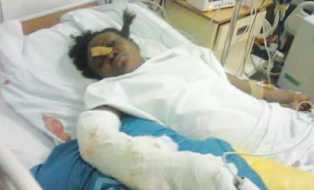 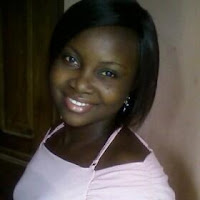 Two weeks after a brutal attack that killed two female NYSC Corpers in River state, another one has happened and this time around, it’s in Bayelsa state.

In the evening hours of Monday the 5th of August, 2013, a 26-year-old NYSC corper was attacked by two suspected cultists around 8:30 pm at Obunagba community located in Yenagoa LGA of Bayelsa.

The victim identified as Folakemi Akinbode who hails from Ondo is a Nursing graduate of Madonna University.

She was returning from NDU Teaching hospital around 8:30 when she was ambushed by 2 suspected cultists who chopped off her right hand.

She would have died if not for the hand she raised to defend herself as her attacker plan to cut off her head.

The victim was said to have ran to the lodge with her injuries shouting “help, help, help…” after which she collapsed and lost consciousness due to excessive bleeding from the almost severed hand.

Sources say “though she had been given three pints of blood, she is yet to regain consciousness.”

Troubled by the development, the traditional ruler of the community, Chief Apoh Godgive, the Ibolou XI, was said to have ordered the immediate setting up of vigilante group in the community with a view to fishing out the perpetrators of the crime.

Miss Akinbode’s attacker are still on the run as police launched manhunt for them.

Folakemi is clinging to life at a local hospital in the area as doctors battle to save her life.

This is so sad.
What is this country turning into?

Imagine an innocent lady with a bright future.

People should stop going out at night…. These attacks are becoming unbearable.