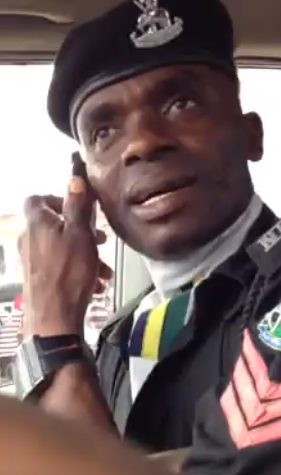 The Police sergeant with force # 192954 whose face was exposed by a secret video stopped a driver and requested for his particulars.

On checking his vehicle’s paper, he actually noticed a legal defect on it which prompted him to ask for N30,000 bribe.

The driver insisted he doesn’t have such money and that all he has was N5000.

An argument started and the sergeant was forced to lower the bribe to N25,000.

To cut the long story short, IGP Abubakar has ordered his arrest.

He has been arrested and waiting for trial.

Check out the official press release of his arrest below;

ARREST OF UNETHICAL POLICEMAN CAUGHT ON VIDEO.
The Policeman involved in the unprofessional and shameful act as seen in a video clip currently in circulation on the social media has been identified. He is a Sergeant with Force Number 192954 (Name withheld) attached to the Lagos State Command Motor Traffic Division (State MTD). He has been arrested and currently in detention awaiting the commencement of his orderly room trial (Nigeria Police version of court). The Inspector General of Police IGP MD Abubakar has directed the Commissioner of Police Lagos State to ensure that the orderly room trial is concluded in record time. The IGP therefore reiterates his assurance to the public of his zero tolerance to any form of corrupt practices involving any Police officer. He equally advises citizens to take advantage of the use of the Nigeria Police Force’ complaint email address; policemonitor@npf.gov.ng which guarantees their confidentiality in forwarding all manners of complaints of unethical conduct involving any police officer or security agent for necessary action.

What a shame! who knows how many people he has done this to?