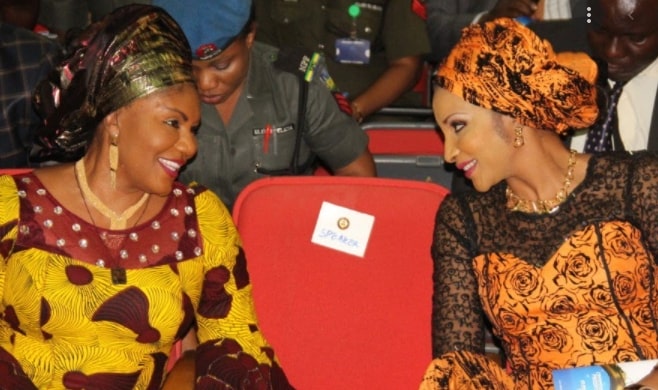 But that reflex action born out of a moment of rage would immediately send shockwaves from one little corner of Awka to the ends of the earth.

The clash was unscripted just as it was unedifying. It stole the thunder of Professor Chukwuma Soludo who had, no doubt, looked forward to a landmark in his life and a historical day for his state. Not even in his wildest dreams would he have imagined that two elegantly dressed VIPs would turn proceedings upside down with a catfight.

Ojukwu has accused her nemesis of acting under the influence, delivering a blow by blow account of their wrestling match. She has talked of how the former governor’s wife called her unprintable names and nudged her delicately arranged headgear.

Mrs. Obiano has been a bit slower in delivering her victim impact statement. She was the recipient of the slap and claims not to understand what could have driven a former diplomat to such depths of anger as to resort to physical combat.

While they would like the world to sympathise with them, there’s no winner here. Both women came out of this encounter as losers.

Their account of the event would understandably vary and the poorly-recorded videos are not a help in establishing the sequence of actions. Ojukwu does accept she hit Obiano. In some other environment the police would quickly open an assault investigation because the slapping incident took place under their very noses.

But I doubt there would be legal consequences for her because of our very Nigerian way of handling these things. Elders would step in to “reconcile” the parties – and there’s really nothing wrong that. Blessed are the peacemakers.

For Bianca, former beauty queen, lawyer and diplomat, wrestling in public places isn’t what you associate with the queen of the legendary Ikemba Nnewi. That elevated image has been muddied beyond recognition because she lost it in the Awka heat.

Public sympathy has largely sided with her against the ex-First Lady which suggests that Mrs. Obiano was hardly flavour of the month whilst she and her husband were in power. This was a clear case of the political wife becoming a liability because most comments on social media revolved round the sentiment that she had the beating coming and truly deserved it.

But what sins did she commit to generate such outpouring of scorn and hate? I am largely ignorant of her antecedents and have chosen to ignore the juicy gossip about her supposed antics. Suffice it to say on the basis of available evidence she was more feared than loved.

You may argue that she bought it on herself by her actions, still, no one deserves to be humiliated in the way she was last weekend. She’ll forever remember how a day that was supposed to be a triumphant riposte to those who didn’t want her husband as governor, ended in spectacular disgrace because of her excesses.

Spare a thought for former governor Obiano. What horror, what mortification, what utter embarrassment he must have felt as he scurried from the event with his humiliated missus.

Spare a thought for Soludo who was supposed to be the centre piece but ended up the sideshow. No one remembers the soaring prose of his speech calling on the Independent Peoples of Biafra (IPOB) and their co-travellers to rethink the strategy of their struggle. Not many remember what he said about his plans for Anambra. What would permanently be etched on their minds would the chaotic scenes that followed after Bianca slapped Ebelechukwu.

Beyond its crude entertainment value, the clash of the well-coiffed ladies is emblematic of the continuous decline of our decadent elite. There’s no depth they won’t plumb. They have lost their capacity to shock and lost every sense of shame.

I have tried unsuccessfully to imagine such a disgraceful display occurring on the grounds of the White House, Downing Street, and Buckingham Palace or on lesser government facilities across the world on a day as grand and dignified as a governor’s inauguration. It’s just unimaginable and even Hollywood hasn’t conjured such a scenario yet.

But in Nigeria all things are possible. Now, we have precedence. Don’t be surprised if in the near future a governor and his deputy ditch their agbadas and go toe-to-toe over some dispute, swiftly joined by their spouses in a gubernatorial free-for-all.

It’s a measure of the plummeting stock of our political elite that while the ambassador and the First Lady were pulling wigs and scratching each other’s eyes out, some onlookers were gleefully recording videos on their cell phones for post-inaugural enjoyment at home.

The Awka show of shame also speaks loudly about the hypocrisy and posturing of our leaders. A little over a week ago the media was awash with reports of a woman in Aguleri community of Anambra State who was stripped naked and publicly humiliated over accusations of adultery and complicity in the death of her husband.

Reacting to the incident, Mrs Obiano released a statement saying: “My attention was drawn to a video clip containing graphic images of a woman subjected to ignominious treatment of the worst kind. She was not only publicly condemned over alleged adultery, but paraded stark naked on the streets. I must say that the conduct of the persons who took the law into their hands to debase the hapless woman was barbaric and disgusting.”

Barely one week after, in the video of her clash with Mrs. Ojukwu, she could be heard clearly calling her foe “ashewo” – local vernacular meaning prostitute. This wasn’t just a direct attack on one woman’s character by another, it was a pejorative deployed to debase her in much the same way as those who did a similar thing in Aguleri.

The disrupted inaugural ceremony is now history. Soludo has moved on with governance and so must the fighters and their families.

The Obiano’s are adjusting to the brutal reality of life without the trappings of office. Just hours after shedding power he was cooling his heels in EFCC detention. Perhaps, that slap on his wife’s face was an unintended way of shaking the once powerful couple out of their reverie and bringing them down to earth with a bump.

Everyone makes mistakes no matter their station. Life’s also about learning, even if most people don’t learn from experience. Hopefully, the ambassador and First Lady can reflect and consider what they could have done differently were circumstances to repeat themselves.