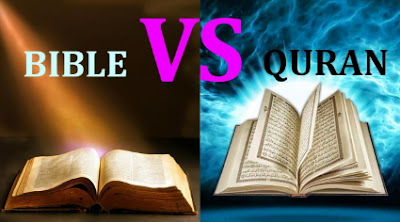 This is the second part of The Bible And Quran: A Personal Opinion Part 1

I was buried in a pile of feedbacks, –emails, comments, text messages and phone calls-some of them disapproval and veiled threats, and others kudos, from friends and readers alike, following the publication of the first part of this article in some online platforms last week.

One reader wrote that I confirmed the Bible’s prediction of the coming of Prophet Mohammad (PBUH) in my article. No I did not. I only stated that the Muslim apologists would have us believe so.

Another decided to blame events like Hiroshima and the atrocities of men like Adolf Hitler on Christianity. Again, that is wrong because the actions of evil doers who profess Christianity are not representative of the religion.  A true Christian must follow the example of Jesus Christ, must be ‘Christ-like’, and history proves Jesus was an extreme pacifist.

I will touch on the subject of bloodshed and both religions in a future article.

For now, let us stick to the debate at hand.

In part one; I explained why I believe the claim of today’s Muslim apologists that the Bible has been corrupted has no basis in the Koran.  We also saw why, as a matter of fact, the exact opposite of this argument is what a closer look at the Koran reveals.

Notice that almost all Biblical figures including our saviour Jesus Christ are here mentioned in the above verse. Can the claim of Biblical corruption still be maintained in the face of the clear endorsement of almost all Biblical figures as seen above?  I pointed out before that some have asked at what point the scriptures revealed earlier were corrupted.  Given the Islamic Doctrine of Abrogation, one would expect an All-Knowing Allah to reveal this date clearly to the Prophet if really such a thing really happened. My humble question to the apologists is this; can you show us a verse in the Koran that says the Bible is corrupt and this is when the corruption happened?

Even though we cannot escape the implications of the verses in the Koran that clearly endorsed the Bible, like they do in many other instances, Muslims continue to claim Biblical corruption.

For example, in Surah Al-E-Imran 199 we read clearly; “Surely, among the people of the Book there are those who believe in Allah and in what has been sent down to you and what has been sent to THEM…” Because this verse refers to the Injil-i.e the gospels-, a keen observer would notice that the plural personal pronoun ‘THEM’ used in this verse is trying to tell us that the gospel was apparently sent not only to Jesus but to ‘THEM’, i.e the people of the Book. Yet we still hear Muslims apologist claiming that the Injil-gospel- was revealed only to Jesus like their claim of Biblical corruption even though the Koran says something different.

To complicate matters, the Muslims apologists tell us Jesus Christ was a Muslim who was unsuccessful in winning converts because His message became quickly corrupted.

For example, Surah Al-E-Imran 50-52 reads, “I –Jesus- have come to you confirming that – i.e the books- which are -sent down- prior to me, that is, the Torah, and… I have come to you with a sign from your Lord so, fear Allah and obey me… he said: “Who are my helpers in the way of Allah?” The disciples said: “We are helpers of Allah. We… are Muslims.”

Some have wondered why a revelation like this verse could find its way into the Koran when the same Koran tells us that Prophet Mohammad (PBUH), who lived 600 years after Jesus Christ, was the first Muslim.

If Jesus was indeed a Muslim, how come his own disciples — Peter, Matthew John co — who were contributors to the Injil –i.e the gospel- that the Koran confirmed, have preached a theology that is so evidently, fundamentally and strongly at odds with the message of the Koran? Is this the reason why the apologists feel the need to discredit the Holy Bible at all cost?

Not only is the Koranic message at odd with the Bible, the Koran confirms that the message of the gospel was known to the “people of the book” i.e Christians and Jews before its own appearance. And available facts proves that that message has not changed except in recent times due to the activities of some heretic ‘Christians’ and the rebranding attempt of  some die-hard Muslim apologists who, some  say, believe that by distorting the facts to confuse the western world, they will win western converts.

It must be noted that there is no similarity between the above quoted Koranic verse and any other ancient manuscripts of the entire Bible that has been discovered to date. Instead, this verse can be traced to the Arabic Infancy Gospel dated to around the sixth century, which scholars say the Prophet may have had access to.

Experts say almost all the stories about Jesus Christ in the Koran may have been taken from ‘Gospels’ like this and that many Muslims love it and other works like the uninspired Gospel of Barabbas so much.

This fact is further buttressed by a story in chapter 36 of the Arabic Infancy Gospel that appears to confirm the Koranic dependence on such apocryphal books.

There we are told when Jesus turned 7, on a certain day; he joined his age mates to play in the sand. Boasting of their skills, the boys made images of oxen, birds and so on from clay.

To prove his superiority, Jesus made his own clay images eat, walk and fly. Upon relating the story to their parents later about what Jesus did, the parents said to their boys: “My sons take care not to keep company with him again for he is a WIZARD…”

A keen observer would note that Jesus Christ is accused of being a “wizard” in that gospel just as, upon relating similar stories, the Koran states in one of its verses that “…the disbelievers among them said, ‘This is a clear magic…’”, i.e that Jesus Christ was a magician, something akin to wizardry in those times.

Countless stories about Jesus Christ in the Koran, for example, like him not dying on the cross, talking as an infant etc, have strong similarity to stories found in this early ‘Gospel’.

So, many Christians ask how Muslims apologists of today could claim Biblical corruption when the evidence suggests that the very sources of most of their own book’s stories about the central figure of Christianity are unreliable.

The biggest hole in today’s Islamists claim of Biblical corruption is the Koran itself, which states plainly on several occasions that no one can alter or change the words of Allah and that Allah preserves and protects His words.

In Surah Al-Anaam 34 we read, “Indeed …No one can change the words of Allah…” And Surah Al-Anaam 115 adds, “The Word of Your Lord is perfect in truth and justice. None is there to change His words, and He is All-Hearing, All-Knowing.”

There are countless verses like these in the Koran. Apologists tell us about the miraculous textual preservation of the Koran so that it perfectly resembles the copy of the seventh century but fail to tell us why, if God was able to perfectly preserve the text of the Koran, why He was unable to do the same with the Bible –the Torah and New Testament before it got lost? Do the above verses not apply equally to the previous revealed words of Allah i.e the Bible-Torah and Injil?

So far, all the ancient available texts show that the Bible is the best attested book in antiquity, based on the sheer volume of manuscripts -between 5 to 6 thousand Greek manuscripts according to experts- and the earliness of those manuscripts.

The earliest manuscripts, especially of the New Testament, demonstrates the existence not of a single line of corrupt transmission, but multiple lines of transmission with varying levels of accuracy.

And these multiple lines of transmission have defied the possibility of being under the control of any central editing process. The early church fathers, scholars, archeologist, historians and so on have confirmed this fact.

In the final parts of this article, we shall see from the Koran itself, why the apologists’ claims regarding the Koran is so heavily flawed.