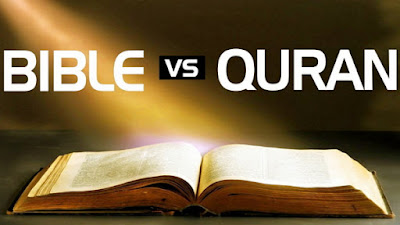 In Part II of this opinion piece, we saw a few of what experts call the most probably sources of Koranic stories about Jesus Christ, and why they insist that the Koran is the least qualified to accuse the Holy Bible of corruption.

We also asked a very salient question which the Muslim apologists have failed to proffer a satisfactory answer to. If you say the Bible-Tawra and Injil– is Allah’s word, and Allah cannot allow His word to be changed, corrupted or lost, as you claim He did by preserving His word the Koran, how come He could not preserve the same word in the Bible, allowing it to be lost, thereby revealing a new book?

Has any Muslim, living or dead, ever set eyes on the original copy that was lost? Of course the answer is a resounding NO because there is no lost or corrupted copy. What we have today is what was, what is and what will ever be.

Therefore, the question before any sincere seeker of truth today is this; from the foregoing, between the Holy Bible and the Koran, which one has better claim to divine authorship?

Some have asked if the Koran, going by what we have found written in it about itself and its author, the example of key players in it, it’s early adherents and today’s extremists, honestly claim to be the same as, least of all a replacement for the Holy Bible? I would say no because of reasons, some of which I mentioned in the previous parts of this article, which are simple and straight forward.

For starters, experts say the Koran does not meet the criteria of a good book least of all a book with divine authorship. They say this is not only because of the testimonies of believers and non-believers alike, but also because of years of painstaking studies and research of those who have spent their entire lives studying the book.

They say the structure of the book itself and the lifestyle of the founder of the religion as recorded in the Hadiths by his most trusted companions also raise doubts about the divine authorship of the book.

Finally and more importantly, Christians say the Koran in Surah An-Nisa 157:158 denied the crucifixion of Jesus Christ and in Surah Al-Maeda 75, denies that Jesus Christ is God’s Incarnate.

They ask how a book that denies the very core essence of Biblical message and the person of Jesus Christ claim to be the same as the Holy Bible, from the same YHWH, the God of the Hebrews and Christians. How can the apologists claim to believe in or follow the same Jesus Christ whom by their actions and words they do not cease to deny daily? This is a question I think the Muslim apologists must answer honestly too.

Scholars say the Koran is at best a manual with bundles of repetitious and glorified compilation of packaged myths and legends, which were taken from the various cultures, religious texts, especially Christian and Jewish sources and around Arabia when the Prophet Mohammad (PBUH) started his ministry. To confirm this fact, one needs to read through the Koran to find that most Biblical stories are retold differently.

Sadly however, the stories taken from these sources according to researchers and historians were altered. So even if by one percent the apologists’ assertion that the Holy Bible has been corrupted were true, could a book like the Koran be its replacement?

The apologists want us to believe the Koran was revealed, but even my 5 years old child knows that to qualify as a revelation a story has to be new not retold, much less in an altered form.

The Holy Bible is not just an ordinary book nor does it need the endorsement of anybody or book to stand the test of veracity. It is the breath and the very Word of the Almighty God, the creator of everything in the universe, both seen and unseen to mankind.

Throughout history, whether one is Christian or not, we have seen that both foes and friends of the Holy Bible have written volumes upon volumes of books but no one has been able to come close to replicating half of the wisdom contained in the Holy Bible.

Despite countless attempts, especially by some Islamic leaders, to stop the distribution of the Holy Bible, particularly in most Islamic lands like Saudi Arabia and Iran, we have seen that the Holy Bible remains till date the most distributed book on earth and an all-time best sellers in the history of mankind with over 6 billion copies sold according to Guinness World Records. Even in Muslim lands, despite the embargo and restrictions placed on the book, most homes have copies of it.

Then let us talk about the subject of the book, Jesus Christ himself, who remains the most talked about figure in human history, so much so that history itself is divided between the time before and after his earthly life.

As I type these words, someone somewhere around the world is kneeling in prayers and calling on the divine presence of Jesus Christ to save, protect, heal, provide for and help him/her and from overwhelming evidences and testimonies, Jesus hears! What does this tell you? Can all these be from and about a book that has been corrupted?

The Bible is almost 800,000 words long, with over 900 English translations ranging from the grandiloquent to colloquial, and over 2500 international languages translations worldwide, and yet it is easy to read with its simple message of salvation for mankind. As we speak, over 5 copies of the Holy book is being given away every second around the world. Yet the Koran, a mere four-fifth of the New Testament in size is so difficult to read, reason being it’s “endless incoherent rhapsody of fables and precepts” according to Thomas Carlyle and its “…toilsome reading as I ever undertook, a wearisome, confused jumble, crude, incondite…” form according to Edward Gibbon.

Many have asked how such a book could be corrupted, lost or have a replacement. As someone who wants to learn, I humbly ask the apologists to show me the records of a fulfilled prophecy, verifiable healing in the Koran or explain the more than 109 verses commanding and glorifying war and bloodshed that experts say are found in it. We hear the wars fought in the Koranic days were ‘holy’ wars, I ask, is there anything holy about war, about taking a human life?

The Bible was written by more than 40 inspired men cut across all walks of life, separated by great geographical divides, with varying degree of sophistication, and over a period of 1500 years, and yet it has a single thematic harmony from the book of Genesis to Revelation. Where secular historians seem quick to cover their mistakes and defeats, Bible writers honestly records both their personal failings and those of their nations. What does that tell you?

In Surah 3:55. and Surah 5:49, the Koran tells us the Holy Bible is the ‘guide of the wise’ and that Jesus Christ was born of a Virgin, that He is the Spirit and Word of God in Surah 21:9 and so on. If the Koran says this, why do the apologists still deny the divinity of Christ the ‘Spirit’ and ‘Word of God’?

Do they really understand what the phrase ‘the Spirit and the Word of God’ expressly used in the Koran really mean? In the final part of this article, we are going to see that they may not afterall. And finally, we are going to be asking them to explain certain contradictory portions of their Koran.

Continue Reading
You may also like...
Related Topics:opinion, personal, quran, the bible

Tonto Dikeh Threatens To Kill Gay Boutique Owner Babatunde Rufai..Fans Question Her Faith
Jim Iyke: My Girlfriend From Barbados Dumped Me As Another Man Impregnated Her