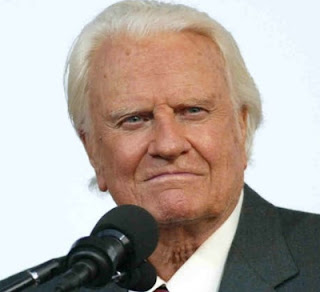 The man of God who gave his entirety to the propagation of the gospel lost his battle to series of age related illnesses this morning at the golden age of 99.

Mr Jeremy Blume, the spokesman for the Billy Graham Evangelist Association confirmed that the well- known Christian Evangelist of over 60 years died this morning in his home in Montreat, Buncombe County, North Carolina.

Although the exact cause of his death is unknown, Billy Graham had battled diseases like Pneumonia, prostate cancer and hydrocephalus (excess fluid in brain) in the past.

He is survived by two sons (Franklin and Ned Graham),  three daughters (Anne, Gigi and Ruth Graham) and 8 grand children.