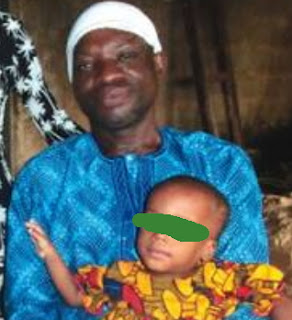 A Pastor with the MFM (Mountain of Fire and Miracles) church in Ikorodu has died months after his family escaped a brutal attack carried out by the dreaded Badoo cultists on their residence.

Ondo-born Pastor Anthony Olawale, a father of three reportedly slumped and died last week Sunday while running a simple errand for his church.

According to his friend, Isamotu Moshood, the deceased who was full of energy on the day he died was trekking when he suddenly slumped and died on the 18th of February 2018.

Here is what his friend wrote on Facebook yesterday.

“The Church was expecting a syndicated audio message, CD, from the MFM Zonal Office, Ikorodu, which was to be played at the Service.

Around 9.30am, it was getting late and the Resident Pastor became restless. He scanned the audience of about 30, looking for an agile person who could run and meet mid-way the person bringing the CD.

He beckoned to the late Pastor. Oh! If the Resident Pastor had known he would have settled for another person for that eventually turned out to be the last assignment for Pastor Anthony.

The late Pastor obediently said ‘Yes sir’ and eagerly stepped forward to receive the sum of N200 note to take Okada to the main road to collect the CD and come back quick. It was a journey of no return as the late pastor never came back to the Church alive.

As a trained plumber, trekking and running long distances to meet customers and inspecting new sites were not strange to him. The late Pastor, in his 50s, after looking around and there was no Okada rider on sight quickly settled for his feet and doubled his steps to catch up with the person bringing the CD that never was.

About 100 meters away from the Church, Pastor Anthony felt dizzy and his eye balls turned rapidly. He slowed, bent his head and stood still for a minute. He soliloquized, staggered to a wall and loosely held on to the fence. Within seconds he lost all the strengths in him.

His hands stripped and went down slowly and hit his Badoo-injured head on the ground. He lied flat; never to rise up again. He stretched his bulky 6-ft frame and breadth deeply, mouth filled with whitish saliva. Right there he answered the final call. His clock ticked off FINALLY on this side of eternity.

People around were initially scared. It took few minutes before somebody could get close to his lifeless body and raised alarm. His death gave no room for any emergency. He lived a quiet life and that characterized his manner of death too.

The Praise worship was still on in his Church when the sad news got to them. ‘Nooooo’!, the Resident Pastor exclaimed. Confusion took over as members ran out. By the time they got to the scene, Pastor Anthony was already cold.

There was no need to call for prayer warriors or need to apply Dr. Daniel Olukoya, MFM General Overseer’s anointing oil or think of any medical aid. Members had wished for a repeat of Lazarus’ experience for Pastor Anthony. But that was not to be.

Many theorized on his death. Could it be the aftermath of the Badoo attack? Was he suffering from any unknown ailment? Was it a spiritual arrow? May be the autopsy could reveal but the family was not ready for that.”

The deceased was laid to rest in his home on Tuesday the 20th of February 2018.