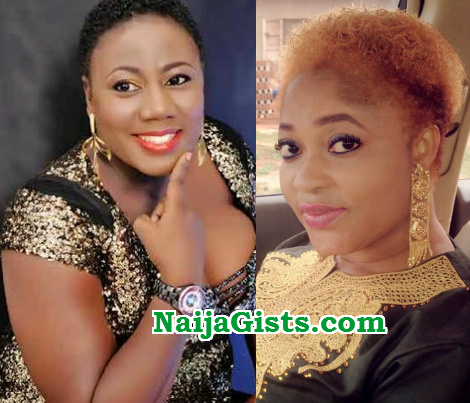 In what sources called romance gone sour, Nollywood actress Biodun Okeowo and Wura Adesegha aka Wura Gold have called off their secret affair .

The former close friends have taken their fight to the social media despite efforts by friends to settle the issue between them.

According to BON organizer, Biodun Okeowo took to the social media yesterday to place this curse on Wura Gold for abusing her kids:

“Wura Adesegha everybody knows you’re a stupid alabosi… as you have curse my kids so u shall not reap the fruit of ur own kid too”. 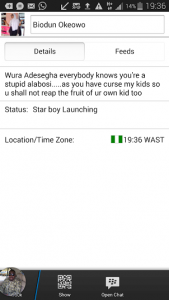 During a telephone chat with BON, Biodun Okeowo said:

”Wura Gold was my friend before and we were very good friends. But I started to give her space when I started realizing the kind of person she truly was.

She told me she wants us to become lovers as in becoming Lesbian partners. I told her wasn’t interested… And that was it. Wura started going around calling me names. She spoils my name in front of everyone… Recently when I went for ‘TESFIR’ Ramadan Lecture. Some people saw me and started calling me friends with Wura Gold, I told them she is not my friend. At least not any more. Liz Dasilva then decided to set in to resolve the cause of the quarrel between us. Liz then called myself and Wura on a conference and tried talking to us. When I opened up to Liz on the reason Wura is fighting me, Wura started to curse me and my children. That was what prompted my BBM update”

Hear her own side of the story:

“…on the contrary it was Biodun Okeowo that asked me to become her lover and I turned her down. Why would she turn things, people are so funny. You can go ahead and ask the likes of Anita Julius and Liz DaSilva at least they have slept in my house, if there was ever anytime I made such silly advances at any of them.”