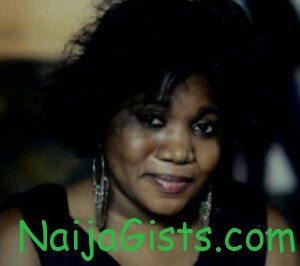 According to a report from BON, the brother of deceased actress Bisi Komolafe has spoken up on her fiance, Tunde Ijaodola. naijagists.com

According to him, Bisi Komolafe initially escaped death from her fiance’s current wife when she visited his house in Epe few months before her death.

He also revealed how her fiance squandered all the financial resources the actress laboured for and how he forced her to stop her house project in Ibadan.

Hear Bisi Komolafe’s brother in his own words below:

Bisi’s life was smooth until she meet Mr ijaduola,he is a big liar,very smooth but very insecured,Our sister loved him and didnt read between the lines of the danger this man posed to her well being,He claimed that he rented the Ikorodu house,My brother that is Another of his lies please go to ikorodu i will give you the numbers of the Landlady she will tell you how Bisi Laboured to pay for the house,Before they meet Bisi already had 2 cars and was building her house in ibadan.

nollywood movie stars at her burial

Since they meet the house project has been on hold because Bisi was helping to maintain this Guy,the last time he travelled to Canada Bisi gave him 200,000 and there were too many complications in his life,Bisi could not stay with him in his Epe home because his wife went to fight him and Bisi had to run for her life,All through Bisi sickness she was the one paying for her treatment,Bisi took 40 pint of blood Mr ijaduola only paid for one and till i speak he is owing Bisi Grandmother 20,000 and Bisi Dad 50,000,what sort of Man is that?

Finally our sister was never married to him and so he should stop calling Bisi Mrs ijaduola,he only proposed to her.They were never engaged and even parlour Engagement they didnt have,we quarreled with him because Mr ijaduola is highly diabolic and all through Bisi sickness he was always bringing different black Substance for her to drink and we said no we are Catholics and we do not believe in such,That was why he picked quarell with us,on the cars of Bisi immediately Bisi got admitted he started driving her Cars around and when he comes to see her at the hospital, he will hide the cars and walk to the hospital,how does that sound Mr ijaduola says he is a car dealer,Car dealer indeed who uses a 2000 model ford,This is our last take on this Guy we leave him to God.