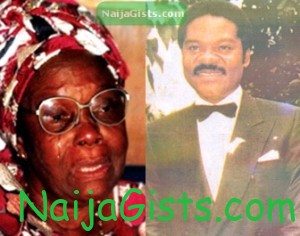 The mother of late Nigerian journalist and news editor, Dele Giwa who was killed by a strange letter bomb at his residence on Oct 19 year 1986 is dead. naijagists.com

Madam Elekhia Giwa died few hours ago after a short time battle with age related illness at a private hospital in Ikorodu, Lagos at the age of 87.

Her death was confirmed in a tweet to Tell Magazine and it reads:

Late Dele Giwa died 2 days after he was interviewed by Nigeria’s SSS (State Security Service) Officials. According to investigations, Dele Giwa’s was assassinated.

As at the time of this report, Madam Elekhia Giwa’s burial arrangement has not been made known.

May her soul rest in perfect peace..