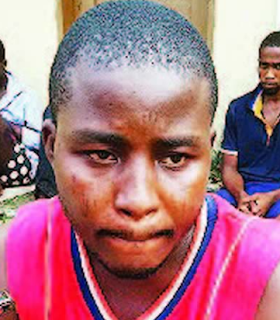 A suspected Black axe cult member has been arrested by Homicide detectives at the State Criminal Investigations Department (SCID), Panti, Yaba, Lagos State for allegedly killing and dumping his girlfriend’s corpse inside a well in Igando area of Lagos.

The suspect, 27-year-old Yemi accused his girlfriend of dating a rival cult member in the community before beating her to death on Friday the 30th of December 2016.

He later threw her corpse into a well in the community to cover up his crime.

However, as he was about escaping , vigilant residents of Igando caught up with him and handed him over to Igando Police Station.

The remains of the lady was later removed from the well by the officials of the State Fire Fighters and deposited at Igando General Hospital Mortuary.