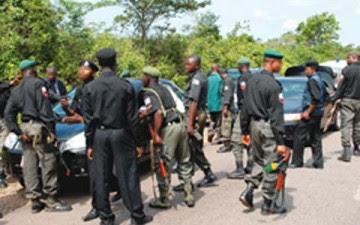 The cultists were said to attacked the properties belonging to the father of a leader in a rival cult group, Buccaneer  located beside Omoleye hospital in Ogijo.

It was learnt that the groups have had several clashes in the neighbourhood, destroying properties and valuables.

We gathered that the attacks have forced residents to flee their homes for fear of being hurt by the cultists.
It was learnt that before the hoodlums set the house ablaze, they damaged two vehicles parked in the compound.

They were said to have poured petrol on the building and lit it, keeping watch to ensure it was completely razed.

But an eyewitness was said to have informed firemen at Ikorodu, who got to the scene on time to quench the fire.

However, they were obstructed by the cultists, who threatened to burn the firemen and their truck if they do not vacate the premises.

Confirming the development, the state fire service director, Rasaq Fadipe said the arson was reported at about 10:26am.

“Someone ran to the station to report the outbreak and firemen moved to the site to contain it.
“But some boys came around and halted firemen from quenching the fire. They threatened to burn the men and the truck if they don’t leave the site.
“I do not know why they set the building ablaze but I learnt it belonged to the father of a rival cult member.”