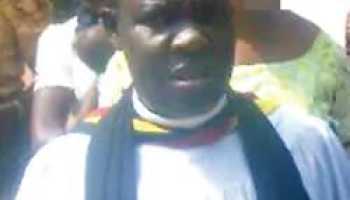 The wife of an Apostolic Faith Pastor who was kidnapped six days ago in Akoko area, Mrs Olu Obafemi has urged the Ondo state government and security agents to ensure quick release of her husband.

She said her husband,Pastor Japhet Obafemi was just discharged from hospital after months of sickness before he was abducted by unknown gunmen who have reduced their ransom to sixteen million naira from the initial sixty million naira.

Speaking with reporters at Ilepa Ikare Akoko, Mrs Obafemi expressed the fear that if not rescued on time, the pastor’s health might relapsed

The victim’s wife who is a primary school teacher, alleged that when they told the abductors that the church and family could not afford such ransom, the suspected kidnappers asked them to sell their property to raise the money.

A member of the Apostolic faith church, Elder Ade olaseni observed that Christians in Ikare under CAN, have embarked on fervent prayers with other faithful for the clergyman’s safe release.