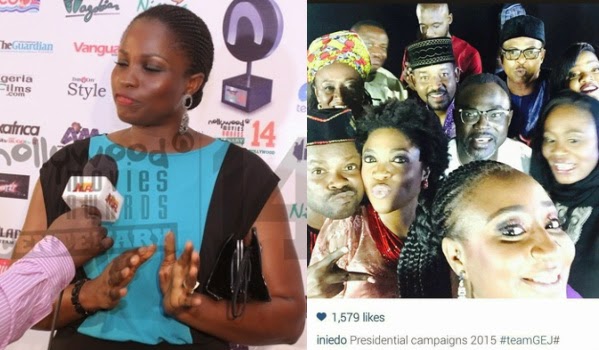 Nollywood actress and film writer, Blessing Egbe, a popular star on Lekki Wives took to FG to bemoan plights of producers in the hands of pirates.

She also blasts her colleagues who enriched their pockets with President Jonathan’s Nollywood grant.

“While I was away on vacation, some one sent me a twitter message to ask if season 3 of lekki Wives was out. She said she saw season 3 in the market. I replied that it wasn’t out and didn’t think it was any biggie because lekki wives 1 and 2 was pirated weeks after it was released. The pirates later merged both seasons in one dvd pack (which we sell in four different packs) and named it season 1 and 2. We tried fighting, but didn’t get any head way so we continued to selling regardless of the grave negative impact it had on the sales. This merge of seasons in a single unclear DVD was what I thought the fan was talking about and so I kept cool. Now, having returned, what did I see in traffic at Ajah? I saw Lekki wives Season 1 to 4 in separated four DVD packaging. Need I say I was traumatized as I am yet to release season 3.

The angry tears began to build as I drove further, seconds later, I sighted kunle Afolayan’s Oct 1st which just closed not too far back at the cinemas. At that point, the tears flowed freely because I understood his pain and empathized with him at his outrage… but trust our people, instead of fighting the core and reason for his outburst, they took the fact that he mentioned a tribe in the process and ran with it, thereby forgetting the reason behind the out cry. Now here goes my out cry to everyone who still buys pirated copies of our films even after all the outcry by producers to boycott it; I beg you to stop or your products of endeavor will be cut short! After we suffer sleepless nights for months!!! scripting, planning, filming and editing a visual content. The foolish ones sit back and wait for the premiere or release of the picture only to pirate and flood the market with it, and because some cheap ass buyers patronize them, they continue to thrive in the business of piracy. Some buyers have complained that the dvds are expensive at 300_500 naira So they would rather buy a pirated one for 100 naira.

They forget that producers invest millions in the content and therefore must recoup unlike the thieves who sit back and pirate with zero investment. Please stop o because as you wet their pockets, your accounts will go dry. Now to the government of nigeria!!! Producer’s have cried and sought for your help to fight piracy but I wander why a government would rather give producers money to shoot a film when there are no proper distribution network aka guarantee for recoup of investments. I asked this same question at the FPF forum last year but some of my colleagues shouted me down because according to them I had made hundreds of millions from lekki wives and so I had no right to ask otherwise!!!

So I sat back, collected the grant money and shot the movie… now I am scared to release because the pirates have gotten so bold that they release a movie that has just closed from the cinemas..

Our colleagues that had the ears of the GEJ government who genuinely wanted to help nollywood went there to enrich their pockets. Now I wonder what lies ahead for the ever struggling hard working producers and Nollywood in general. Mtewwww!”