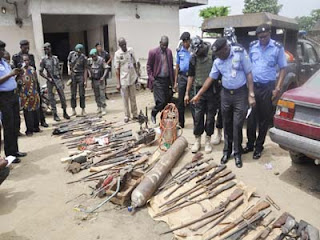 It was a tense day at Ihieorji community in Aba South LGA of Abia State as suspected drug gangs struck and killed about 6 persons.

Reports from the area on Tuesday night, however, gave the death toll to ten with several persons injured and currently receiving medical attention in an undisclosed private Hospital in Aba.

It was learnt that about four persons died on the spot, while two others died at the hospital while they were being given medical attention.

Sources at the area told our reporter on Thursday that the gunmen numbering five had struck the village at about 7.45pm in an ash colour Lexus Sports Utility Vehicle (SUV) and started shooting sporadically at anyone on sight.

A source who pleaded anonymity said that while the gunmen were shooting, they overheard them telling their victims that kill them since they wouldn’t let them (gunmen) operate within the community.

At the end of the attack which was said to have lasted well over one hour without any challenge from security agencies in Aba.

One of the victims whose name was simply given as Herbert and believed to be the major target of the hoodlums had his stomach ripped open by bullets and his intestine splattered on the ground during the shootout.

But another account of the incident from a resident of the area alleged that the gunmen whose identity were yet unknown shot their victims in a drug bunk and after the operation shot sporadically into the air while they were escaping in a commercial bus.

The source who simply gave his name as Chetachukwu said that they have been living in fear since after the incident over the fear of being unduly arrested by security agents who couldn’t come to their area while the shooting lasted.

They appealed to government and security heads in Aba and the state at large to come to their rescue, stressing that they have been sleeping with eyes open since Tuesday that the incident happened.

When contacted, the spokesman of Abia State Police Command, Geoffrey Ogbonna confirmed the shooting incident and described it as a drug war between two rival groups.

Nollywood Actresses Told Me They Are Being Pressured To Sleep With Producers – Kanayo
Armed Robbery At Skye Bank In Ifon Ondo State: Chaos As 15 Robbers Blow Up Strong Room, Kill 2