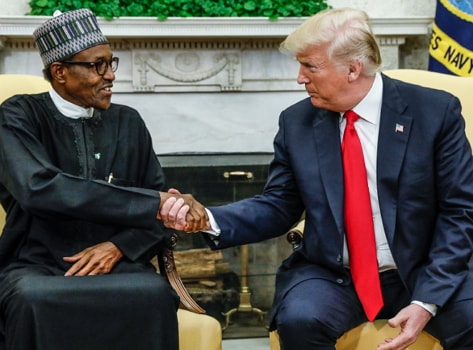 An “Amebo” statement the President of the United States of America made about Buhari back in April has come back to haunt him months later.

According to the Financial Times, the White House Boss called Buhari lifeless after meeting with him on the 30th of April 2018.

The controversial statement that leaked this morning has stirred different opinions online with many Pro Buhari commentators slamming President Trump for making such cruel remarks against Mr President.

A wise person can only see this as politics.

Why did the Financial Times wait till now to leak Trump unwise comment about a top world leader.

“President Muhammadu Buhari is fit and capable to run for the 2019 elections and oversee the affairs of the country for four more years President Donald Trump’s hate speech notwithstanding.”

“We are aware that President Trump’s disrespect for World Leaders is not new; his comments on Canada’s Prime Minister, Justin Trudeau, calling him ‘meek and mild’; his reference to Germany’s Leader, Angela Merkel’s actions as ‘insane’, or his outlandish Tweet at the UK’s Theresa May, and more recently, the alleged remarks he made after meeting President Buhari.

“It is indeed not the first time President Trump would be heard to lower the standards of respect for his colleagues on the World Stage. We are not surprised, we know that this age-long character of the US President would not change anytime soon. But it is important that we put it on record that President Buhari remains fit and sprightly, even for the next decade.

How will Donald Trump feel if another world leader calls him an unkind name.

Trump will be remembered for his unguarded manner of speaking. What a legacy!!!.