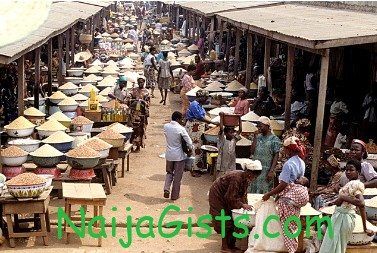 Residents of Alhaja Sarat Street, Off Jare Emily area in Oyo town were shocked yesterday when officers of the Oyo State Police Command arrested five persons over alleged murder of a business woman, identified simply as Kafilat, at Bodija Market in Oyo town by her male friend. The suspects were brought to the house where the crime was committed.

Gbenga Taiwo (Kafilat’s male friend) was alleged to have conspired with his friends, Ganiyu and Kareem (surnames withheld), to kill Kafilat for money-making ritual. Taiwo was said to have contacted Saheed, an Alfa, for money ritual and decided to use Kafilat for the ritual. Taiwo, according to sources, had invited the deceased and taken her to the house where Lukman worked as a guard, fed her and later drugged her so that she could sleep off, to enable them to carry out the heinous act.

When Kafilat was sleeping she was attacked with a big stick and assassinated. Her body was then cut into pieces and set ablaze so that their secret would not be found out by anyone. Assistant Commissioner of Police, Janet Agbede, while briefing newsmen in Oyo said the command started investigating the crime when one Mrs. Sekinat Lateeef, relative of the deceased, made a report at Central Police Station, Iyaganku, that Kafilat was missing.

According to her, the deceased had earlier contacted her relative on her mobile phone that she was in Oyo with Gbenga, her male friend. “We immediately commenced our investigation. Those men had deceived the family of Kafilat that she had an accident and that she had been admitted at General Hospital in Lagos. The family checked most of the hospitals in Lagos but could not find her. On information, we later got Taiwo arrested and thereafter others.” (source)