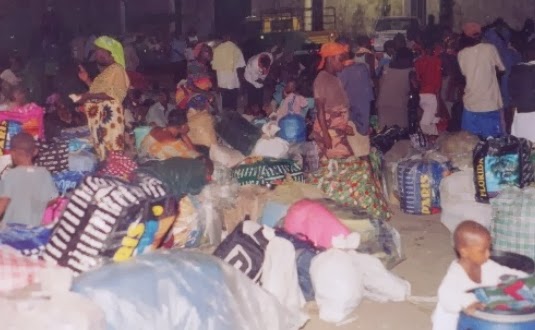 Thousands of people have fled across Nigeria’s borders with Cameroon and Niger amid renewed clashes between the Nigerian military and Boko Haram insurgents, the UN’s refugee agency said Friday.

Adrian Edwards, spokesman for the UN High Commissioner for Refugees, said that 4,000 people had fled to Cameroon since mid-January, and 1,500 to Niger.

In northern Cameroon, UN aid workers met with refugees from around the town of Banki, which lies just over the border in Nigeria.

“The refugees said their villages were bombed, that several people had been killed and that at least two villages were burned to the ground,” Edwards told reporters.

Nigerian authorities imposed a state of emergency in three northern states in May 2013 in a bid to crush an insurgency by the Islamist group Boko Haram.

Thousands of people have fled across the borders or to other parts of Nigeria to avoid being caught up in the fighting, to escape attacks by militants or to flee what human rights groups say is a heavyhanded government crackdown that has also affected civilians.

The new influx raises the number of Nigerian refugees in Cameroon to more than 12,400 — just over 2,000 of whom have been moved to camps deeper inside the country.

In Niger, meanwhile, those who have fled include 8,000 Nigerians and 30,000 Niger nationals who had been living in Nigeria.

The latest refugees there told UN aid workers that they had fled a village after its mosque was attacked, seven people were killed and 60 shops torched.

Most of the refugees were women and children, and were being hosted by the local community, Edwards said.

The UN has appealed to countries in the region to keep their borders open for Nigerians who need a haven, and not to send back any refugees.

Boko Haram have been fighting a drawn-out insurgency since 2009 in the mainly Muslim north, attacking schools teaching a “Western” curriculum and churches, claiming thousands of lives.

Emergency rule has largely succeeded in pushing the militants out of towns and cities in the wider north but attacks are still frequent in more remote areas, particularly in border regions.