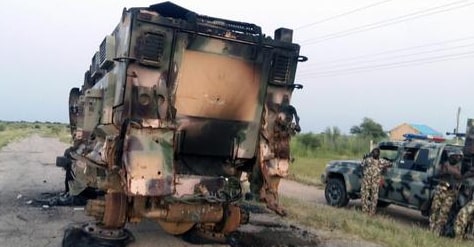 Not less than 70 Nigerian soldiers were killed in an ambush on their convoy by Boko Haram terrorists in the restive northeast, military and security sources said on Tuesday.

Insurgents fired rocket-propelled grenades at a lorry carrying troops as it travelled near Gorgi village in Borno state on Monday, two military officers told AFP without giving their names.

“It was a huge loss, at least 70 soldiers have perished in the ambush,” one of the officers said.

“The terrorists specifically targeted a truck loaded with soldiers with RPGs and incinerated the vehicle, killing all on board,” a second officer said.

“So far 70 bodies have been recovered but the toll is certainly more than that as rescue operation is still underway.”

Several soldiers were injured and some others taken captive by the jihadists, the two officers said.

A spokesman for the Nigerian army told AFP that he was unable to comment on the reported attack.

The convoy had left regional capital Maiduguri on its way to launch an offensive on a camp belonging to jihadists affiliated to the Islamic State group in the area, a member of a government-backed militia fighting the insurgents told AFP.

The group has been accused of increasing attacks on civilians and taking hostages at bogus checkpoints on main roads in the region.

The decade-long conflict has killed 36,000 people and displaced 1.8 million in the northeast of Nigeria.

Fighting has also spilt over the border into neighbouring countries, prompting the formation of a regional military coalition to fight the insurgents.