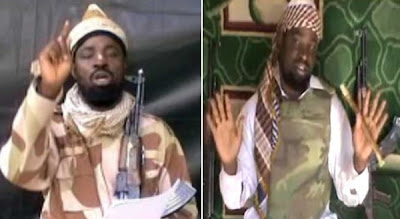 In a video sent to some journalists in Nigeria yesterday, the leader of the sect, Abubakar Shekau debunked any victory asserted by Nigeria’s security forces.

He further vowed to kill more soldiers and confront the United States of America.

“You soldiers have claimed that you are powerful, that we have been defeated, that we are mad people,”
“But how can a mad man successfully coordinate recent attacks in Gamboru, in Malam Fatori, slaughter people in Biu, kill in Gwoza and in Bama, where soldiers fled under our heavy fire power?
“We have killed countless soldiers and we are going to kill more. We can now comfortably confront the United States of America.” Shekau said in the local Hausa language.

Boko Haram terrorists who believed they have power over Nigeria are now vowing to confront America.

Hope the international communities are reading this.